Sailing the Ocean of Complexity: Lessons from the Physics-Biology Frontier (Hardcover) 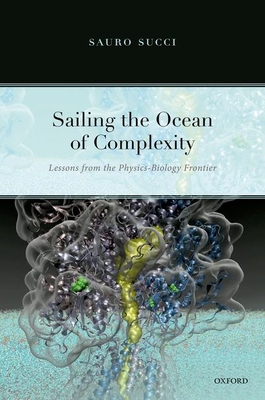 Sailing the Ocean of Complexity: Lessons from the Physics-Biology Frontier (Hardcover)


Not On Our Shelves—Ships in 1-5 Days
Both superb and essential... Succi, with clarity and wit, takes us from quarks and Boltzmann to soft matter - precisely the frontier of physics and life. Stuart Kauffman, MacArthur Fellow, Fellow of the Royal Society of Canada, Gold Medal Accademia Lincea We live in a world of utmost complexity, outside and within us. There are thousand of billions of billions of stars out there in the Universe, a hundred times more molecules in a glass of water, and another hundred times more in our body, all working in sync to keep us alive and well. At face value, such numbers spell certain doom for our ability to make any sense at all of the world around and within us. And yet, they don't. Why, and how - this book endeavours to provide an answer to these questions with specific reference to a selected window of the physics-biology interface. The story unfolds over four main Parts. Part I provides an introduction to the main organizational principles which govern the functioning of complex systems in general, such as nonlinearity, nonlocality and ultra-dimensions. Part II deals with thermodynamics, the science of change, starting with its historical foundations laid down in the 19th century, and then moving on to its modern and still open developments in connection with biology and cosmology. Part III deals with the main character of this book, free energy, and the wondrous scenarios opened up by its merger with the modern tools of statistical physics. It also describes the basic facts about soft matter, the state of matter most relevant to biological organisms. Finally, Part IV discusses the connection between time and complexity, and its profound implications on the human condition, i.e. the one-sided nature of time and the awareness of human mortality. It concludes with a few personal considerations about the special place of emotions and humility in science.

Sauro Succi, Senior Research Executive and Principal Investigator, La Sapienza, Italian Institute of Technology, Rome Sauro Succi graduated in Nuclear Engineering from the University of Bologna and holds a PhD in Physics from the Swiss Polytechnique Institute in Lausanne. He has been working at several Italian and European institutions, including the Max Planck Institute for Plasma Physics, EPFL, IBM Europe, The Italian National Research Council and lately the Italian Institute of Technology. He also held numerous teaching and research appointments in Europe and USA, particularly at Harvard University.