Russia Resurrected: Its Power and Purpose in a New Global Order (Hardcover) 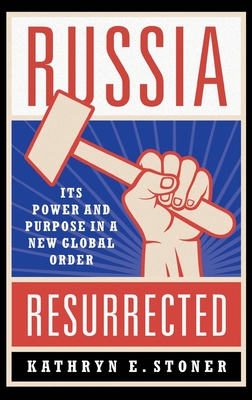 Russia Resurrected: Its Power and Purpose in a New Global Order (Hardcover)


On Our Shelves Now at:
An assessment of Russia that suggests that we should look beyond traditional means of power to understand its strength and capacity to disrupt international politics. Too often, we are told that Russia plays a weak hand well. But, perhaps the nation's cards are better than we know. Russia ranks significantly behind the US and China by traditional measures of power: GDP, population size and health, and military might. Yet 25 years removed from its mid-1990s nadir following the collapse of the USSR, Russia has become a supremely disruptive force in world politics. Kathryn E. Stoner assesses the resurrection of Russia and argues that we should look beyond traditional means of power to assess its strength in global affairs. Taking into account how Russian domestic politics under Vladimir Putin influence its foreign policy, Stoner explains how Russia has battled its way back to international prominence. From Russia's seizure of the Crimea from Ukraine to its military support for the Assad regime in Syria, the country has reasserted itself as a major global power. Stoner examines these developments and more in tackling the big questions about Russia's turnaround and global future. Stoner marshals data on Russia's political, economic, and social development and uncovers key insights from its domestic politics. Russian people are wealthier than the Chinese, debt is low, and fiscal policy is good despite sanctions and the volatile global economy. Vladimir Putin's autocratic regime faces virtually no organized domestic opposition. Yet, mindful of maintaining control at home, Russia under Putin also uses its varied power capacities to extend its influence abroad. While we often underestimate Russia's global influence, the consequences are evident in the disruption of politics in the US, Syria, and Venezuela, to name a few. Russia Resurrected is an eye-opening reassessment of the country,
identifying the actual sources of its power in international politics and why it has been able to redefine the post-Cold War global order.

Kathryn E. Stoner is the Deputy Director at the Freeman Spogli Institute for International Studies and a Senior Fellow at the Center on Democracy, Development, and the Rule of Law, and at the Center for International Security and Cooperation, all at Stanford University. She is the author or co-editor of five books, including Transitions to Democracy: A Comparative Perspective, written and edited with Ambassador Michael A. McFaul, and Resisting the State: Reform and Retrenchment in Post-Soviet Russia.