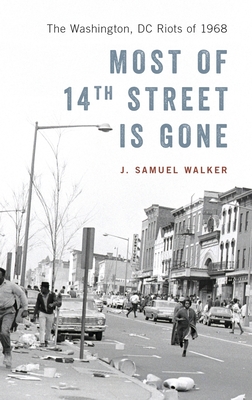 
In Stock—Click for Locations
Left behind were hundreds of burned-out buildings, whole blocks that looked as though they had been bombed into oblivion. These words, written by the Washington Post's Leonard Downie Jr., do not describe a war zone but rather the nation's capital reeling in the wake of the riots of April
1968. In the devastating aftermath of Martin Luther King's assassination, a community already plagued by poor living conditions, unfair policing, and segregation broke into chaos. These riots brought well-documented tragedy and heartbreak--not only among the families of those who lost their lives but also among those who lost their homes, possessions, jobs, and businesses. There was anger, fear, and anxiety throughout the city of Washington, DC, from the White House to the
residential neighborhoods of the capital. There was an excruciating dilemma for President Lyndon Johnson. He was outraged by the violence in the streets, but he also keenly aware that African American citizens who joined the riots had legitimate grievances that his civil rights initiatives did
little to address. J. Samuel Walker's Most of 14th Street is Gone takes an in-depth look at the causes and consequences of the Washington, DC riots of 1968. It shows the conditions that existed in Washington, DC's low-income neighborhoods, setting the stage for the disorders that began after King's murder. It also
traces the growing fears produced by the outbreaks of serious riots in many cities during the mid-1960s. The centerpiece of the book is a detailed account of the riots that raged in Washington, DC from the perspectives of rioters, victims, law enforcement officials, soldiers, and government leaders.
The destruction was so extensive that parts of the city were described as smoldering ruins block after block. Walker analyzes the reasons for the riots and the lessons that authorities drew from them. He also provides an overview of the struggle that the city of Washington, DC faced in recovering
from the effects of the 1968 disorders. Finally, he considers why serious riots have been so rare in Washington, DC and other cities since 1968. Walker's timely and sensitive examination of a community, a city, and a country rocked by racial tension, violence, and frustration speaks not only to this
nation's past but to its present.

J. Samuel Walker is a prize-winning historian who has published books on topics that include President Truman and the use of the atomic bomb, the Three Mile Island nuclear accident, and the creation of March Madness.