The Long Crisis: New York City and the Path to Neoliberalism (Hardcover) 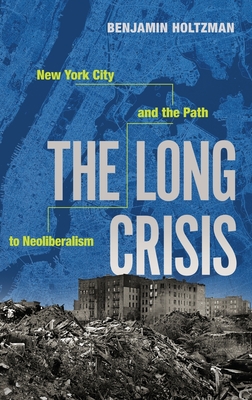 The Long Crisis: New York City and the Path to Neoliberalism (Hardcover)


In Stock—Click for Locations
Across all the boroughs, The Long Crisis shows, New Yorkers helped transform their broke and troubled city in the 1970s by taking the responsibilities of city governance into the private sector and market, steering the process of neoliberalism. Newspaper headlines beginning in the mid-1960s blared that New York City, known as the greatest city in the world, was in trouble. They depicted a metropolis overcome by poverty and crime, substandard schools, unmanageable bureaucracy, ballooning budget deficits, deserting businesses, and a
vanishing middle class. By the mid-1970s, New York faced a situation perhaps graver than the urban crisis: the city could no longer pay its bills and was tumbling toward bankruptcy. The Long Crisis turns to this turbulent period to explore the origins and implications of the diminished faith in government as capable of solving public problems. Conventional accounts of the shift toward market and private sector governing solutions have focused on the rising influence of
conservatives, libertarians, and the business sector. Benjamin Holtzman, however, locates the origins of this transformation in the efforts of city dwellers to preserve liberal commitments of the postwar period. As New York faced an economic crisis that disrupted long-standing assumptions about the
services city government could provide, its residents--organized within block associations, non-profits, and professional organizations--embraced an ethos of private volunteerism and, eventually, of partnership with private business in order to save their communities' streets, parks, and housing
from neglect. Local liberal and Democratic officials came to see such alliances not as stopgap measures but as legitimate and ultimately permanent features of modern governance. The ascent of market-based policies was driven less by a political assault of pro-market ideologues than by ordinary New
Yorkers experimenting with novel ways to maintain robust public services in the face of the city's budget woes. Local people and officials, The Long Crisis argues, built neoliberalism from the ground up, creating a system that would both exacerbate old racial and economic inequalities and produce new ones that continue to shape metropolitan areas today.

Benjamin Holtzman is an Assistant Professor of History at Lehman College.