The Drone Age: How Drone Technology Will Change War and Peace (Hardcover) 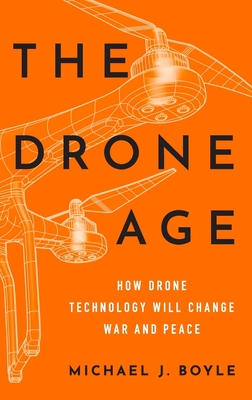 The Drone Age: How Drone Technology Will Change War and Peace (Hardcover)


Not On Our Shelves—Ships in 1-5 Days
In The Drone Age, Michael J. Boyle addresses some of the biggest questions surrounding the impact of drones on our world today and the risks that we might face tomorrow. Will drones produce a safer world because they reduce risk to pilots, or will the prospect of clean, remote warfare lead governments to engage in more conflicts? Will drones begin to replace humans on the battlefield? Will they empower soldiers and peacekeepers to act more precisely and humanely in crisis zones? How will terrorist organizations turn this technology back on the governments that fight them? And how are drones enhancing surveillance capabilities, both at war and at home? As advanced drones come into the hands of new actors-foreign governments, local law enforcement, terrorist organizations, humanitarian organizations, and even UN peacekeepers-it is even more important to understand what kind of world they might produce. The Drone Age explores how the unique features of drone technology are altering the decision-making processes of governments and non-state actors alike by transforming their risk calculations and expanding their capacities both on and off the battlefield. By changing what these actors are willing and ready to do, drones are quietly transforming the dynamics of wars, humanitarian crises, and peacekeeping missions while generating new risks to security and privacy. An essential guide to a potentially disruptive force in modern world politics, The Drone Age shows how the innovative use of drone technology will become central to the ways that governments and non-state actors compete for power and influence in the future.

Michael J. Boyle is an Associate Professor and Chair of Political Science at La Salle University. He is also a Senior Fellow at the Foreign Policy Research Institute (FPRI) in Philadelphia. His previous books include Violence after War: Explaining Instability in Post-Conflict States, Legal and Ethical Implications of Drone Warfare, and Non-Western Responses to Terrorism.