Trumping Politics as Usual: Masculinity, Misogyny, and the 2016 Elections (Paperback) 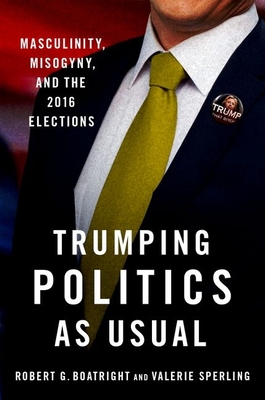 Trumping Politics as Usual: Masculinity, Misogyny, and the 2016 Elections (Paperback)


Not On Our Shelves—Ships in 1-5 Days
(This book cannot be returned.)
In many elections, candidates frame their appeals in gendered ways--they compete, for instance, over who is more masculine. This is the case for male and female candidates alike. In the 2016 presidential election, however, the stark choice between the first major-party female candidate and a man who exhibited a persistent pattern of misogyny made the use of gender more prominent than in any previous election in the United States. Presidential campaigns often have an impact on downballot Congressional races, but the 2016 election provided a new opportunity to see the effects of misogyny. While much has been written about the 2016 election--and the shadow of 2016 clearly affected the pool of candidates in the 2018 midterms--this book looks at how the Trump and Clinton campaigns actually changed the behavior of more conventional candidates for Congress in 2016 and 2018. Over the past decade, those who study political parties have sought to understand changes in the relationship between groups and parties and how these changes have affected the ability of parties to develop coherent campaign strategies. The clear need for rapid adjustments in party strategy in the 2016 election provides an ideal means of testing whether today's political parties are more able or less able to respond to unexpected events. This book argues that Donald Trump's candidacy radically altered the nature of the 2016 congressional campaigns in two ways. First, it changed the issues of contention in many of these races. Trump's provocative calls for building a wall along the Mexican border and temporarily prohibiting immigration from Muslim countries inserted issues of race and ethnicity into elections and forced candidates to respond to his proposals. Most consequentially, however, Trump's attacks on women--including television personalities, politicians, and, at times, private
citizens--alienated numerous potential supporters and placed many of his supporters (and downballot Republican candidates in particular) on the defensive. Second, expectations that Trump would lose the election influenced how candidates for lower office campaigned and how willing they were to connect their fortunes to those of their party's nominee. The fact that Trump was expected to lose--and was expected to lose in large part because of his misogyny--caused both major parties to direct more of their resources toward congressional races, and led many Republican candidates, especially women, to distance themselves from Trump. This book explores how the Trump and Clinton campaigns used gender as a political weapon, and how the presidential race changed the ways in which House and Senate campaigns were waged in 2016 and 2018.

Robert G. Boatright is Professor of Political Science at Clark University and the Director of Research at the National Institute for Civil Discourse at the University of Arizona. His research focuses on the effects of campaign and election laws on the behavior of politicians and interest groups, with a particular focus on primary elections and campaign finance laws and practices. He is the author or editor of seven books, including The Deregulatory Moment? A Comparative Perspective on Changing Campaign Finance Laws, Getting Primaried: The Causes and Consequences of Congressional Primary Challenges, and Interest Groups and Campaign Finance Reform in the United States and Canada. Valerie Sperling is Professor of Political Science at Clark University. Her research interests lie mainly at the intersection of Russian politics and gender studies. She is a co-author of Courting Gender Justice: Russia, Turkey, and the European Court of Human Rights, and the author of Sex, Politics, & Putin: Political Legitimacy in Russia, Altered States: The Globalization of Accountability, and Organizing Women in Contemporary Russia.