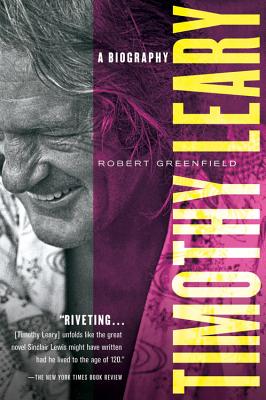 
Not On Our Shelves—Ships in 1-5 Days
To a generation in full revolt against any form of authority, "Tune in, turn on, drop out" became a mantra, and its popularizer, Dr. Timothy Leary, a guru. A charismatic and brilliant psychologist, Leary became first intrigued and then obsessed by the effects of psychedelic drugs in the 1960s while teaching at Harvard, where he not only encouraged but instituted their experimental use among students and faculty. What began as research into human consciousness turned into a mission to alter consciousness itself. Leary transformed himself from serious social scientist into counterculture shaman, embodying the idealism and the hedonism of an age of revolutionary change.

Timothy Leary is the first major biography of one of the most controversial figures in postwar America.

ROBERT GREENFIELD is the author of a biography of Jerry Garcia and a book about rock impresario Bill Graham, which won a Ralph J. Gleason Award and the ASCAP Deems Taylor Award for Excellence. He lives in California.

PRAISE FOR DARK STAR: AN ORAL BIOGRAPHY OF JERRY GARCIA
"A poignant glimpse of a man with extraordinary power who ultimately used that power against himself."-THE BOSTON GLOBE

"Greenfield renders an unflinching portrait of one of the most prolific and enigmatic figures in American music." -SAN FRANCISCO CHRONICLE