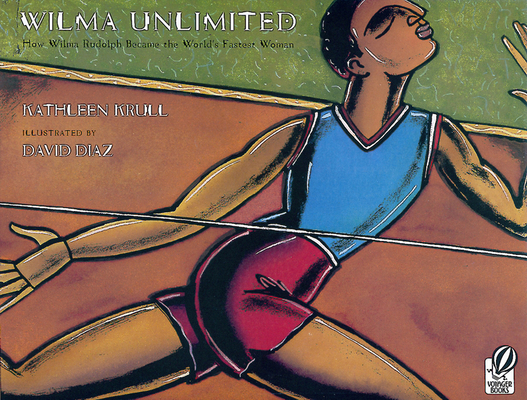 Before Wilma Rudolph was five years old, polio had paralyzed her left leg. Everyone said she would never walk again. But Wilma refused to believe it. Not only would she walk again, she vowed, she'd run. And she did run—all the way to the Olympics, where she became the first American woman to earn three gold medals in a single Olympiad. This dramatic and inspiring true story is illustrated in bold watercolor and acrylic paintings.

Kathleen Krull is well known for her innovative, award-winning nonfiction for young people, including Lives of the Explorers, Lives of the Musicians, and all other books in this popular series illustrated by Kathryn Hewitt. She is also the author of Harvesting Hope: The Story of Cesar Chavez, illustrated by Yuyi Morales, as well as The Beatles Were Fab (and They Were Funny) and Lincoln Tells a Joke: How Laughter Saved the President (and the Country), both co-written with Paul Brewer and illustrated by Stacy Innerst. She lives in San Diego, California. Visit her online at kathleenkrull.com.

David Diaz has illustrated numerous award-winning books for children, including Smoky Night by Eve Bunting, for which he was awarded the Caldecott Medal; The Wanderer by Sharon Creech, which received a Newbery Honor; and Diego: Bigger Than Life by Carmen T. Bernier-Grand, a Pura Belpré Honor Award winner. An illustrator and graphic designer for more than twenty-five years, he is also a painter and an accomplished ceramic artist. Mr. Diaz lives in Carlsbad, California.