The Call of Cthulhu and Other Weird Stories: (Penguin Orange Collection) (Paperback) 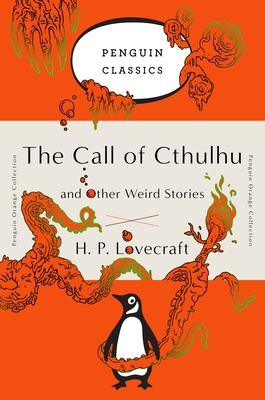 The Call of Cthulhu and Other Weird Stories: (Penguin Orange Collection) (Paperback)


In Stock—Click for Locations
Part of the Penguin Orange Collection, a limited-run series of twelve influential and beloved American classics in a bold series design offering a modern take on the iconic Penguin paperback

For the seventieth anniversary of Penguin Classics, the Penguin Orange Collection celebrates the heritage of Penguin’s iconic book design with twelve influential American literary classics representing the breadth and diversity of the Penguin Classics library. These collectible editions are dressed in the iconic orange and white tri-band cover design, first created in 1935, while french flaps, high-quality paper, and striking cover illustrations provide the cutting-edge design treatment that is the signature of Penguin Classics Deluxe Editions today.

The Call of Cthulhu and Other Weird Stories

Frequently imitated and widely influential, Howard Phillips Lovecraft reinvented the horror genre in the twentieth century, discarding ghosts and witches and instead envisioning mankind as a tiny outpost of dwindling sanity in a chaotic and malevolent universe. This definitive collection reveals the development of Lovecraft’s mesmerizing narrative style and establishes him as a canonical—and visionary—American writer.
H. P. Lovecraft (1890–1937) was born in Providence, Rhode Island, where he lived most of his life. He wrote many essays and poems early in his career, but gradually focused on the writing of horror stories, after the advent in 1923 of the pulp magazine Weird Tales, to which he contributed most of his fiction. His relatively small corpus of fiction—three short novels and about sixty short stories—has nevertheless exercised a wide influence on subsequent work in the field, and he is regarded as the leading twentieth-century American author of supernatural fiction.

S. T. Joshi is a freelance writer and editor. He has prepared comprehensive editions of Lovecraft’s collected fiction, essays, and poetry. He is also the author of The Weird Tale (1990), The Modern Weird Tale (2001), and Unutterable Horror: A History of Supernatural Fiction (2012). His award-winning biography H. P. Lovecraft: A Life (1996) was later expanded as I Am Providence: The Life and Times of H. P. Lovecraft (2010). He has also prepared Penguin Classics editions of the work of Arthur Machen, Lord Dunsany, Algernon Blackwood, M. R. James, and Clark Ashton Smith, as well as the anthology American Supernatural Tales (2007).