Gods and Kings: The Rise and Fall of Alexander McQueen and John Galliano (Paperback) 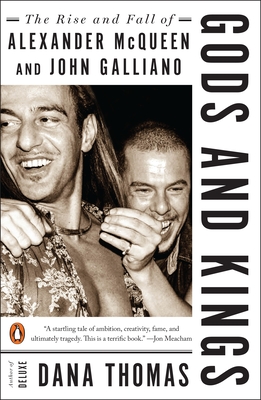 Gods and Kings: The Rise and Fall of Alexander McQueen and John Galliano (Paperback)

The New York Times–bestselling author of Deluxe and Fashionopolis: The Price of Fast Fasion and the Future of Clothes chronicles the making and unmaking of two of the greatest fashion designers of our time

In the mid-1990s, John Galliano and Alexander McQueen exploded onto a fashion scene that was in an artistic and economic rut. Their daring visions shook the establishment out of its bourgeois, minimalist stupor with vibrant, sexy designs and theatrical runway shows. By the end of the decade, each had been hired to run one of couture’s most storied houses, Galliano at Dior and McQueen at Givenchy. They were icons of a new generation of rock-star designers who headlined the transformation of luxury fashion from a small clutch of family-owned businesses into a global, multibillion-dollar corporate industry. But the pace was unsustainable. In 2010, McQueen took his own life. A year later, Galliano was fired in the wake of an alcohol-fueled, anti-Semitic diatribe.

In her groundbreaking work Gods and Kings, acclaimed fashion journalist Dana Thomas tells the true story of two unforgettable artists. In so doing, she pulls back the curtain on the revolution that has remade high fashion over the last two decades—and the price it demanded from the very ones who saved it.

Jon Meacham, Pulitzer Prize-winning author of Thomas Jefferson and American Lion:
“Dana Thomas has written a real-life saga that is as engaging and compelling as a work of great fiction. By taking us inside the fascinating world of fashion, she gives us a startling tale of ambition, creativity, fame, and ultimately tragedy. This is a terrific book.”

Michael Gross, author of Model and House of Outrageous Fortune:
“Comprehensive, detailed, coldly accurate yet extraordinarily sympathetic, Dana Thomas’s Gods and Kings is a fascinating double biography of two dressmakers of genius. But it's also a riveting, definitive history of the three decades in which fashion devolved from a coddling cottage business to a cutthroat industry quite capable of killing its young. As commerce triumphs over art, you can only cringe, but you also have to admire Thomas's exhaustive account of what fashion folk would no doubt refer to as a moment that will never, and can never, be repeated.”

Teri Agins, author of Hijacking the Runway and The End of Fashion:
“John Galliano and Alexander McQueen raised the bar creatively and theatrically with their high-impact fashion shows. In Gods and Kings, Paris based fashion writer Dana Thomas digs deep with the zeal of a historian, to chronicle the parallel dramas of the British fashion wunderkinds, whose careers ended tragically, way too soon.”

Richard Johnson, columnist, The New York Post
"McQueen and Galliano were two peas in a perverse pod who revolutionized fashion. No one but Dana Thomas could have explained with such insight how their fantasies became ours and directed our dreams."