Paris versus New York: A Tally of Two Cities (Hardcover) 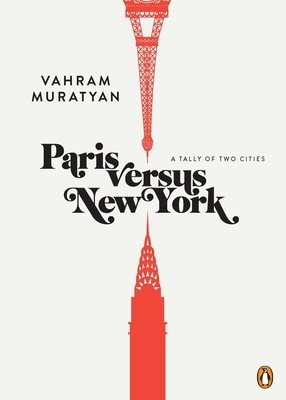 Paris versus New York: A Tally of Two Cities (Hardcover)

When Vahram Muratyan began his online travel journal, Paris versus New York, he had no idea how quickly it would become one of the most buzzed-about sites on the Internet—it garnered more than a million and a half page views in just a few months, and the attention of savvy online critics. Now Muratyan presents his unique observations in this delightful book, featuring visually striking graphics paired with witty, thought-provoking taglines that celebrate the special details of each city. Paris versus New York is a heartfelt gift to denizens of both cities and to those who dream of big-city romance.
Vahram Muratyan is a French visual storyteller and art director. In 2010, during a long stay in New York, Vahram launched his first blog, Paris versus New York, a tally of two cities. Millions of online visits later, Vahram shows this series in real life, at colette in Paris and The Standard in NY. The book Paris versus New York becomes an international best-seller, translated in the US, France, Brazil, Italy, Germany, South Korea & Japan. Since then, Vahram has designed many movie and festival posters, magazine covers and visual identities, collaborating with famous luxury and publishing houses. His next book is due in the fall 2022 : In Va Au Japon (Japan Calling) Vahram explores the most fascinating archipelago through a playful visual travelogue.
"In his witty, high-concept, high-colored flipbook “Paris Versus New York: A Tally of Two Cities” ...Mr. Muratyan uses splashy collagist art to showcase the visual beauty marks of the two metropolises."
— The New York Times

"Playfully pitting Paris and New York against each other, graphic designer Vahram Muratyan has created a visual homage to two evocative cities." -- The Guardian