Four Fish: The Future of the Last Wild Food (Paperback) 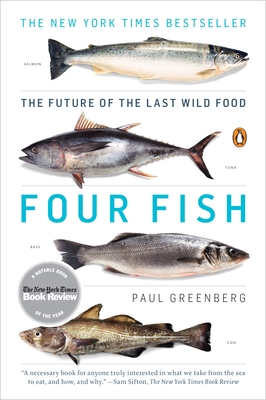 Four Fish: The Future of the Last Wild Food (Paperback)


Not On Our Shelves—Ships in 1-5 Days
“A necessary book for anyone truly interested in what we take from the sea to eat, and how, and why.” —Sam Sifton, The New York Times Book Review

Acclaimed author of American Catch and The Omega Princple and life-long fisherman, Paul Greenberg takes us on a journey, examining the four fish that dominate our menus: salmon, sea bass, cod, and tuna.

Investigating the forces that get fish to our dinner tables, Greenberg reveals our damaged relationship with the ocean and its inhabitants. Just three decades ago, nearly everything we ate from the sea was wild. Today, rampant overfishing and an unprecedented biotech revolution have brought us to a point where wild and farmed fish occupy equal parts of a complex marketplace.

Four Fish offers a way for us to move toward a future in which healthy and sustainable seafood is the rule rather than the exception.
Paul Greenberg is the author of the James Beard Award-winning Four Fish and American Catch and a regular contributor to The New York Times. His writing has also appeared in The New Yorker, National Geographic, and GQ, among other publications, and he has lectured widely on ocean issues at institutions ranging from Google to Yale to the U.S. Senate. He lives in New York.

“‘The passion to save bluefin is as strong as the one to kill them,‘ Greenberg writes, ‘and these dual passions are often contained within the body of a single fisherman.‘ Four Fish is a marvelous exploration of that contradiction, one that is reflected in the stance and behavior of all nations that fish. It is a necessary book for anyone truly interested in what we take from the sea to eat, and how, and why.” —The New York Times Book Review