The Ascent of Money: A Financial History of the World: 10th Anniversary Edition (Paperback) 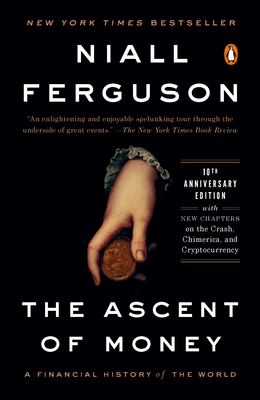 The Ascent of Money: A Financial History of the World: 10th Anniversary Edition (Paperback)

“How did we get into the current economic mess? Niall Ferguson explains all -- from ancient Mesopotamia to the collapse of Lehman Brothers -- and in The Ascent of Money he makes financial history read like a thriller.”
— Sue Barnett, Hamish & Henry Booksellers Inc., Livingston Manor, NY

The 10th anniversary edition, with new chapters on the crash, Chimerica, and cryptocurrency

"[An] excellent, just in time guide to the history of finance and financial crisis." —The Washington Post

In this updated edition, Niall Ferguson brings his classic financial history of the world up to the present day, tackling the populist backlash that followed the 2008 crisis, the descent of "Chimerica" into a trade war, and the advent of cryptocurrencies, such as Bitcoin, with his signature clarity and expert lens.

The Ascent of Money reveals finance as the backbone of history, casting a new light on familiar events: the Renaissance enabled by Italian foreign exchange dealers, the French Revolution traced back to a stock market bubble, the 2008 crisis traced from America's bankruptcy capital, Memphis, to China's boomtown, Chongqing. We may resent the plutocrats of Wall Street but, as Ferguson argues, the evolution of finance has rivaled the importance of any technological innovation in the rise of civilization. Indeed, to study the ascent and descent of money is to study the rise and fall of Western power itself.
Niall Ferguson is one of the world's most renowned historians. He is the author of Paper and Iron, The House of Rothschild, The Pity of War, The Cash Nexus, Empire, Colossus, The War of the World, The Ascent of Money, High Financier, Civilization, The Great Degeneration, Kissinger, 1923-1968: The Idealist, and The Square and the Tower. He is Senior Fellow at the Hoover Institution, Stanford University, and a Visiting Professor at Tsinghua University, Beijing. His many awards include the Benjamin Franklin Prize for Public Service (2010), the Hayek Prize for Lifetime Achievement (2012) and the Ludwig Erhard Prize for Economic Journalism (2013).
"Before regulators throw block trades, bond swaps, bridge financing, butterfly spreads and Black-Scholes out with the bathwater, they should find time to read Niall Ferguson's The Ascent of Money." —The Wall Street Journal

"[An] excellent, just in time guide to the history of finance and financial crisis." —The Washington Post