And Then You're Dead: What Really Happens If You Get Swallowed by a Whale, Are Shot from a Cannon, or Go Barreling over Niagara (Paperback) 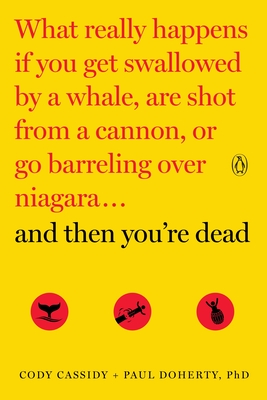 And Then You're Dead: What Really Happens If You Get Swallowed by a Whale, Are Shot from a Cannon, or Go Barreling over Niagara (Paperback)


Backordered
A gleefully gruesome look at the actual science behind the most outlandish, cartoonish, and impossible deaths you can imagine

What would happen if you took a swim outside a deep-sea submarine wearing only a swimsuit? How long could you last if you stood on the surface of the sun? How far could you actually get in digging a hole to China? Paul Doherty, senior staff scientist at San Francisco’s famed Exploratorium Museum, and writer Cody Cassidy explore the real science behind these and other fantastical scenarios, offering insights into physics, astronomy, anatomy, and more along the way.

Is slipping on a banana peel as hazardous to your health as the cartoons imply? Answer: Yes. Banana peels ooze a gel that turns out to be extremely slippery. Your foot and body weight provide the pressure. The gel provides the humor (and resulting head trauma).

Can you die by shaking someone’s hand? Answer: Yes. That’s because, due to atomic repulsion, you’ve never actually touched another person’s hand. If you could, the results would be as disastrous as a medium-sized hydrogen bomb.

If you were Cookie Monster, just how many cookies could you actually eat in one sitting? Answer: Most stomachs can hold up to sixty cookies, or around four liters. If you eat or drink more than that, you’re approaching the point at which the cookies would break through the lesser curvature of your stomach, and then you’d better call an ambulance to Sesame Street.
Cody Cassidy has worked as the sports editor for Zimbio.com, a sports reporter for Stanford Athletics, and a writer for Coach magazine. He has no firsthand experience with any of the scenarios described in this book.

Paul Doherty worked as the senior staff scientist at San Francisco’s famed Exploratorium Museum. He is the co-writer numerous books, including The Exploratorium Science Snackbook, Explorabook, and the Klutz Book of Magnetic Magic. He received his PhD in solid state physics from MIT.
“As someone who is averse to flying, elevators, and a catalog of other things I’d rather not admit to, I found this book strangely cathartic. A great read, full of interesting anecdotes and funny commentary.”
—Ali Almossawi, author of Bad Choices and An Illustrated Book of Bad Arguments

“Arch, brainy . . . [with] vivid, engaging, and utterly fascinating scientific explanations. This merrily macabre compendium playfully offers lessons in basic human physiology, nuclear fusion, quantum physics, and fluid dynamics, among other things, and at every turn, the authors explain the concepts cogently and with gleeful enthusiasm. . . . With bite-size morsels of astonishing science and the perfect combination of smart-alecky writing and black humor, this page-turner will surely debunk any misapprehension that science is dull.”
—Booklist