Common Sense: and The American Crisis I (Paperback) 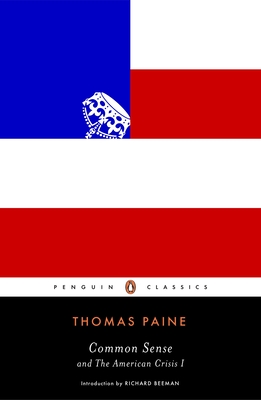 Common Sense: and The American Crisis I (Paperback)

Thomas Paine’s Common Sense may well be the most influential polemic in all of American history. Published anonymously in 1776, six months before the Declaration of Independence, this incendiary call for Americans to revolt against British rule converted millions to the cause of independence and set out a vision of a just society liberated from the yoke of the crown. Paine’s pamphlet was the first to speak directly to a mass audience—and his assertive and often caustic style embodied the democratic spirit he advocated.

This expanded edition also features Paine’s The American Crisis I, the first in a series of pamphlets aimed at bolstering American morale during the Revolution. An introduction by preeminent constitutional expert Richard Beeman traces Paine’s origins and illuminates the significance of these writings.

For more than sixty-five years, Penguin has been the leading publisher of classic literature in the English-speaking world. With more than 1,500 titles, Penguin Classics represents a global bookshelf of the best works throughout history and across genres and disciplines. Readers trust the series to provide authoritative texts enhanced by introductions and notes by distinguished scholars and contemporary authors, as well as up-to-date translations by award-winning translators.
THOMAS PAINE (1737–1809) was one of the most celebrated figures of the American Revolution. His works include Common Sense, Rights of Man, and The Age of Reason.

RICHARD BEEMAN is John Welsh Centennial Professor of History at the University of Pennsylvania. He is editor of the Penguin Civic Classics series and the author of seven books, including The Penguin Guide to the United States Constitution. He lives in Philadelphia.
“No writer has exceeded Paine in ease and familiarity of style; in perspicuity of expression, happiness of elucidation, and in simple unassuming language.” —Thomas Jefferson