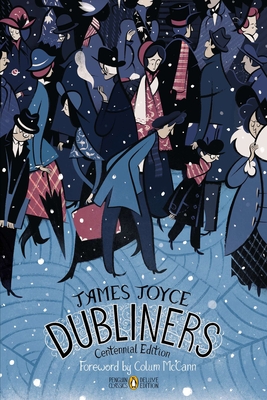 
On Our Shelves Now at:
For the centennial of its original publication, an irresistible Deluxe Edition of one of the most beloved books of the 20th century—featuring a foreword by Colum McCann, the bestselling author of Let the Great World Spin and TransAtlantic

Perhaps the greatest short story collection in the English language, James Joyce’s Dubliners is a vivid and unflinching portrait of “dear dirty Dublin” at the turn of the twentieth century. These fifteen stories, including such unforgettable ones as “Araby,” “Grace,” and “The Dead,” delve into the heart of the city of Joyce’s birth, capturing the cadences of Dubliners’ speech and portraying with an almost brute realism their outer and inner lives. Dubliners is Joyce at his most accessible and most profound, and this edition is the definitive text, authorized by the Joyce estate and collated from all known proofs, manuscripts, and impressions to reflect the author’s original wishes.

For more than seventy years, Penguin has been the leading publisher of classic literature in the English-speaking world. With more than 1,700 titles, Penguin Classics represents a global bookshelf of the best works throughout history and across genres and disciplines. Readers trust the series to provide authoritative texts enhanced by introductions and notes by distinguished scholars and contemporary authors, as well as up-to-date translations by award-winning translators.
James Joyce (1882–1941), an Irish poet and novelist, was one of the most celebrated writers of the twentieth century. His works include Ulysses, Finnegans Wake, and A Portrait of the Artist as a Young Man.

Colum McCann (foreword) is the author of the National Book Award–winning novel Let the Great World Spin and of TransAtlantic. Born in Dublin, Ireland, he now lives in New York City.

Terence Brown (introduction and notes) is an emeritus fellow of Trinity College Dublin.

Roman Muradov (cover illustrator) has done illustrations for an array of clients, including The New Yorker, The New York Times, Vogue, NPR, and Dark Horse Comics. He lives in San Francisco.
“A hundred years on . . . Dubliners has been absorbed into our literary landscape, but in the early part of the twentieth century it was the sort of book that hadn’t been seen much before, certainly from an Irish writer, and much of it shocked the conventional literary world. . . . [Joyce] was taking the lived landscape of his childhood and transforming it into something universal. . . . The stories contain some of the most beautiful sentences ever written in English.” —Colum McCann, from the Foreword