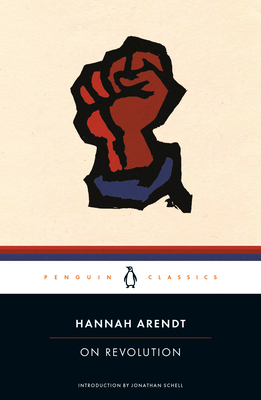 
On Our Shelves Now at:
A unique and fascinating look at violent political change by one of the most profound thinkers of the twentieth century and the author of Eichmann in Jerusalem and The Origins of Totalitarianism

Hannah Arendt’s penetrating observations on the modern world, based on a profound knowledge of the past, have been fundamental to our understanding of our political landscape. On Revolution is her classic exploration of a phenomenon that has reshaped the globe. From the eighteenth-century rebellions in America and France to the explosive changes of the twentieth century, Arendt traces the changing face of revolution and its relationship to war while underscoring the crucial role such events will play in the future. Illuminating and prescient, this timeless work will fascinate anyone who seeks to decipher the forces that shape our tumultuous age.
Hannah Arendt (1906–1975) was University Professor of political philosophy in the graduate Faculty of the New School for Social Research, a visiting professor at several universities including California, Princeton, Columbia, and Chicago, a research director of the Conference on Jewish Relations, the chief editor of Schocken Books, and the executive director of Jewish Cultural Reconstruction in New York City. She was awarded a Guggenheim Fellowship in 1952, and an Arts and Letters Grant of the National Institute of Arts and Letters in 1954. She is also the author of Between Past and Future and Eichmann in Jerusalem, which are available from Penguin Classics along with The Portable Hannah Arendt.

Jonathan Schell (1943­–2014) was the Lannan Fellow at the Nation Institute. He is the author of The Unconquerable World: Power, Nonviolence, and the Will of the People and The Fate of the Earth, among other books.
“Arendt’s admirers will welcome her excursion into the relatively neglected field of comparative revolution. She is never dull, enormously erudite, always imaginative, original and full of insights.” —The Sunday Times (London)