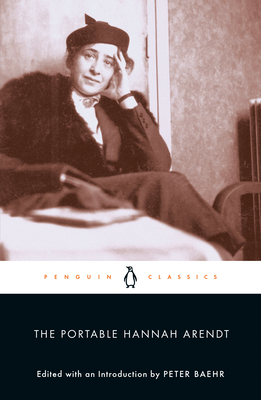 
On Our Shelves Now at:
A collection of writings by a groundbreaking political thinker, including excerpts from The Origins of Totalitarianism and Eichmann in Jerusalem

She was a Jew born in Germany in the early twentieth century, and she studied with the greatest German minds of her day—Martin Heidegger and Karl Jaspers among them. After the rise of the Nazis, she emigrated to America where she proceeded to write some of the most searching, hard-hitting reflections on the agonizing issues of the time: totalitarianism in both Nazi and Stalinist garb; Zionism and the legacy of the Holocaust; federally mandated school desegregation and civil rights in the United States; and the nature of evil.

The Portable Hannah Arendt offers substantial excerpts from the three works that ensured her international and enduring stature: The Origins of Totalitarianism, The Human Condition, and Eichmann in Jerusalem. Additionally, this volume includes several other provocative essays, as well as her correspondence with other influential figures.

Hannah Arendt (1906–1975) was University Professor of political philosophy in the graduate Faculty of the New School for Social Research, a visiting professor at several universities including California, Princeton, Columbia, and Chicago, a research director of the Conference on Jewish Relations, the chief editor of Schocken Books, and the executive director of Jewish Cultural Reconstruction in New York City. She was awarded a Guggenheim Fellowship in 1952, and an Arts and Letters Grant of the National Institute of Arts and Letters in 1954. She is also the author of Between Past and Future, On Revolution, and Eichmann in Jerusalem, which are available from Penguin Classics.

Peter Baehr is a professor and the department head of the Department of Politics and Sociology at Lingnan University in Hong Kong. His publications include Caesar and the Fading of the Roman World, The Protestant Ethic and the “Spirit” of Capitalism and other Writings (editor), and Founders, Classics, Canons: Modern Disputes over the Origins and Appraisal of Sociology’s Heritage.