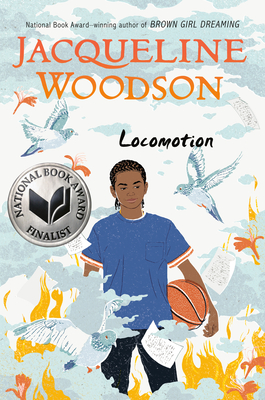 
On Our Shelves Now at:
Finalist for the National Book Award

When Lonnie was seven years old, his parents died in a fire. Now he's eleven, and he still misses them terribly. And he misses his little sister, Lili, who was put into a different foster home because "not a lot of people want boys-not foster boys that ain't babies." But Lonnie hasn't given up. His foster mother, Miss Edna, is growing on him. She's already raised two sons and she seems to know what makes them tick. And his teacher, Ms. Marcus, is showing him ways to put his jumbled feelings on paper.

Told entirely through Lonnie's poetry, we see his heartbreak over his lost family, his thoughtful perspective on the world around him, and most of all his love for Lili and his determination to one day put at least half of their family back together. Jacqueline Woodson's poignant story of love, loss, and hope is lyrically written and enormously accessible.
Jacqueline Woodson (www.jacquelinewoodson.com) is the recipient of a 2020 MacArthur Fellowship, the 2020 Hans Christian Andersen Award, the 2018 Astrid Lindgren Memorial Award, and the 2018 Children’s Literature Legacy Award. She was the 2018–2019 National Ambassador for Young People’s Literature, and in 2015, she was named the Young People’s Poet Laureate by the Poetry Foundation. She received the 2014 National Book Award for her New York Times bestselling memoir Brown Girl Dreaming, which was also a recipient of the Coretta Scott King Award, a Newbery Honor, the NAACP Image Award, and a Sibert Honor. She wrote the adult books Red at the Bone, a New York Times bestseller, and Another Brooklyn, a 2016 National Book Award finalist. Born in Columbus, Ohio, Jacqueline grew up in Greenville, South Carolina, and Brooklyn, New York, and graduated from college with a B.A. in English. She is the author of dozens of award-winning books for young adults, middle graders, and children; among her many accolades, she is a four-time Newbery Honor winner, a four-time National Book Award finalist, and a three-time Coretta Scott King Award winner. Her books include Coretta Scott King Award winner Before the Ever After; New York Times bestsellers The Day You Begin and Harbor Me; The Other Side, Each Kindness, Caldecott Honor book Coming On Home Soon; Newbery Honor winners Feathers, Show Way, and After Tupac and D Foster; and Miracle's Boys, which received the LA Times Book Prize and the Coretta Scott King Award. Jacqueline is also a recipient of the Margaret A. Edwards Award for lifetime achievement for her contributions to young adult literature and a two-time winner of the Jane Addams Children's Book Award. She lives with her family in Brooklyn, New York.
* “A moving, lyrical, and completely convincing novel. . . . Woodson nails Lonnie’s voice from the start, and lets him express himself through images and thoughts that vibrate in the different kinds of lines he puts down. . . . Woodson’s created a character whose presence you can feel like they were sitting next to you. . . . Don’t let anyone miss this.”—Kirkus Reviews, starred review

* “In a masterful use of voice, Woodson allows Lonnie’s poems to tell a complex story of loss and grief and to create a gritty, urban environment. . . . Minor characters are three-dimensional, making the boy’s world a convincingly real one. . . . The author places the characters in nearly unbearable circumstances, then lets incredible human resiliency shine through.”—School Library Journal, starred review

* “Woodson, through Lonnie, creates a contagious appreciation for poetry while using the genre as a cathartic means for expressing the young poet’s own grief.”—Publishers Weekly, starred review