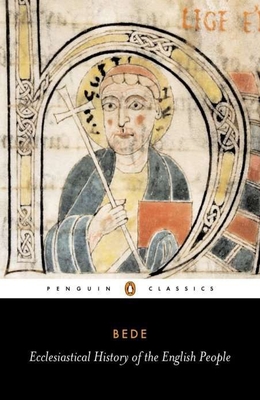 
On Our Shelves Now at:
'With God's help, I, Bede ... have assembled these facts about the history of the Church in Britain ... from the traditions of our forebears, and from my own personal knowledge'

Written in AD 731, Bede's Ecclesiastical History of the English People is the first account of Anglo-Saxon England ever written, and remains our single most valuable source for this period. It begins with Julius Caesar's invasion in the first century BC and goes on to tell of the kings and bishops, monks and nuns who helped to develop government and convert the people to Christianity during these crucial formative years. Relating the deeds of great men and women but also describing landscape, customs and ordinary lives, this is a rich, vivid portrait of an emerging church and nation by the 'Father of English History'.

Leo Sherley-Price's translation from the Latin brings us an accurate and readable version of Bede's History. This edition includes Bede's Letter to Egbert, denouncing false monasteries; and The Death of Bede, an admirable eye-witness account by Cuthbert, monk and later Abbot of Jarrow, both translated by D. H. Farmer.

For more than seventy years, Penguin has been the leading publisher of classic literature in the English-speaking world. With more than 1,700 titles, Penguin Classics represents a global bookshelf of the best works throughout history and across genres and disciplines. Readers trust the series to provide authoritative texts enhanced by introductions and notes by distinguished scholars and contemporary authors, as well as up-to-date translations by award-winning translators.
Bede (c. 672 or 673 – May 25, 735), was a Benedictine monk at the Northumbrian monastery of Saint Peter at Monkwearmouth, today part of Sunderland, and of its companion monastery, Saint Paul's, in modern Jarrow (see Wearmouth-Jarrow), both in the English county of Durham (now Tyne and Wear). He is well known as an author and scholar, and his most famous work, Historia ecclesiastica gentis Anglorum (The Ecclesiastical History of the English People) gained him the title "The father of English history".

D.H. Farmer was Reader in History at Reading University until 1988. He is author and editor of several books on ecclesiastical and monastic history such as The Oxford Dictionary of Saints.