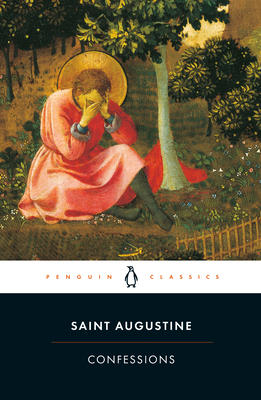 
Not On Our Shelves—Ships in 1-5 Days
The son of a pagan father and a Christian mother, Saint Augustine spent his early years torn between conflicting faiths and world views. His Confessions, written when he was in his forties, recount how, slowly and painfully, he came to turn away from his youthful ideas and licentious lifestyle, to become instead a staunch advocate of Christianity and one of its most influential thinkers. A remarkably honest and revealing spiritual autobiography, the Confessions also address fundamental issues of Christian doctrine, and many of the prayers and meditations it includes are still an integral part of the practice of Christianity today.

For more than seventy years, Penguin has been the leading publisher of classic literature in the English-speaking world. With more than 1,700 titles, Penguin Classics represents a global bookshelf of the best works throughout history and across genres and disciplines. Readers trust the series to provide authoritative texts enhanced by introductions and notes by distinguished scholars and contemporary authors, as well as up-to-date translations by award-winning translators.
St Augustine of Hippo, the great Doctor of the Latin Church, was born at Thagaste in North Africa, in A.D. 354. He was brought up as a Christian but he was soon converted to the Manichean religion. He also came under the influence of Neoplatonism. However, in 387 he renounced all his unorthodox beliefs and was baptised. His surviving works had a great influence on Christian theology and the psychology and political theology of the West.

R.S. Pine-Coffin is a Roman Catholic and was born in 1917.
"[Wills] renders Augustine’s famous and influential text in direct language with all the spirited wordplay and poetic strength intact." —Los Angeles Times

"[Wills’s] translations . . . are meant to bring Augustine straight into our own minds; and they succeed. Well-known passages, over which my eyes have often gazed, spring to life again from Wills’s pages." —Peter Brown, The New York Review of Books