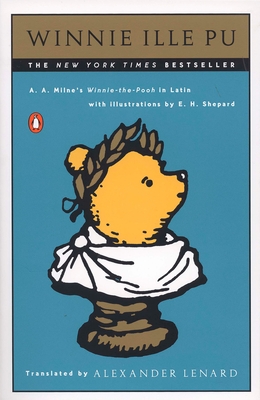 By A. A. Milne, Alexander Lenard (Translated by), Israel Walker (Notes by)


In Stock—Click for Locations
Happy 90th birthday (10/14/16) to one of the world's most beloved icons of literature, Winnie-the-Pooh!

“Pooh has been a classic for so long, it's about time it showed up in a classical tongue.” —The New York Times Book Review

The publishing history of Winnie Ille Pu is among the most famous in all of publishing: how a privately printed Latin translation of A. A. Milne's Winnie-the-Pooh, originally issued in a 300-copy edition, eventually became the only book in Latin ever to grace the New York Times bestseller list. Whether you're calling on long-ago high school Latin lessons or are fully proficient in the language, you'll delight in once again meeting Christopher Robin, Eeyore, Owl, Piglet, Kanga, tiny Roo, and, of course, Pooh himself.

This is a revised edition with notes and a glossary.
A. A. Milne was born in 1882 in London. He was a playwright and journalist as well as a poet and storyteller. His classic children's books were inspired by his son, Christopher Robin. Milne died in 1956.

Born in Budapest in 1910, Alexander Lenard was a graduate of the famous Theresianum in Vienna. A refugee from Hitler who migrated to Brazil by the way of Rome, he worked variously as a pharmacist, math teacher, quiz show contestant, farmer, painter, poet, and pianist as well as, of course, a translator. At the time of his death in 1972 he was fluent in twelve languages. Winnie Ille Pu was the product of over seven years of work, beginning with a German translation of the famous classic in 1951, on which A.A. Milne personally congratulated him.
“An altogether ingenious tour de force.”
—The Washington Post

“A book anyone with even the slightest knowledge of Latin can enjoy . . . It does more to attract interest in Latin than Cicero, Caesar, and Virgil combined.”
—Chicago Tribune

“Pooh has been a classic for so long, it's about time it showed up in a classical tongue.”
—The New York Times Book Review

“A brilliantly funny book . . . Nothing is skipped, every word is there.”
—New York Herald Tribune Book Review

“Proof that humor is not dead, even if Latin is supposed to be.”
—New York World Telegram & Sun

“It is hard to conceive of a Latin work more calculated than this attractive volume to fascinate the modern public, young and old.”
—Christian Science Monitor