Not That You Asked... (Paperback) 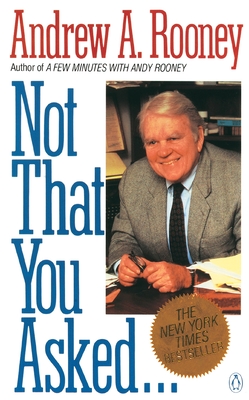 Not That You Asked... (Paperback)

By Andrew A. Rooney


Special Order—Subject to Availability
Andy Rooney once again proves why he is one of America’s favorite curmudgeons. Writing at the top of his form, Rooney covers a plethora of subjects, from getting rid of leftovers to the worst job in the world, from travel tips for the travel industry to the best hotel room he ever had.

Andy Rooney has an opinion on everything, and in his inimitably irreverent and crotchety style he voices here those things we’ve always wanted to say but never thought we could get away with. You’ll find yourself smiling and frowning and involuntarily bobbing your head in agreement.

“As television watchers know, Andrew A. Rooney is a very funny fellow. He can be even funnier in print, as Not That You Asked… aptly demonstrates.”—Associated Press

“The greatest thing about Andy is that he makes everyone uncomfortable—especially me.”—Don Hewitt, executive producer, 60 Minutes