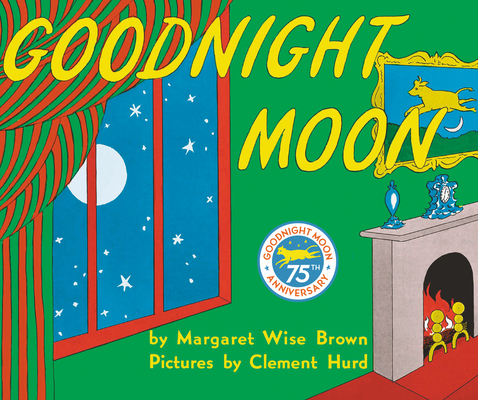 In this classic of children's literature, beloved by generations of readers and listeners, the quiet poetry of the words and the gentle, lulling illustrations combine to make a perfect book for the end of the day.

In a great green room, tucked away in bed, is a little bunny. "Goodnight room, goodnight moon." And to all the familiar things in the softly lit room—to the picture of the three little bears sitting on chairs, to the clocks and his socks, to the mittens and the kittens, to everything one by one—the little bunny says goodnight.

One of the most beloved books of all time, Goodnight Moon is a must for every bookshelf and a time-honored gift for baby showers and other special events.

"Little children will love this going to sleep book—a really fresh idea by a talented and prolific author, illustrated by Clement Hurd. In a soft sing-song, here is a bunny saying goodnight room, goodnight moon, goodnight to all the familiar objects in the softly lighted room. Then—as the room darkens, in successive pictures, the goodnight ceremony moves forward." — Kirkus Reviews