A Series of Unfortunate Events #1: The Bad Beginning (Hardcover) 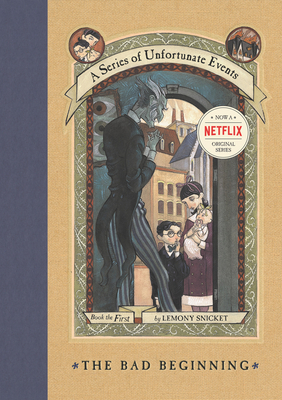 A Series of Unfortunate Events #1: The Bad Beginning (Hardcover)

This is book number 1 in the A Series of Unfortunate Events series.

In the tradition of great storytellers, from Dickens to Dahl, comes an exquisitely dark comedy that is both literary and irreverent, hilarious and deftly crafted. Never before has a tale of three likeable and unfortunate children been quite so enchanting, or quite so uproariously unhappy.

Violet, Klaus, and Sunny Baudelaire are intelligent children. They are charming, and resourceful, and have pleasant facial features. Unfortunately, they are exceptionally unlucky.

In the first two books alone, the three youngsters encounter a greedy and repulsive villain, itchy clothing, a disastrous fire, a plot to steal their fortune, a lumpy bed, a deadly serpent, a large brass reading lamp, a long knife, and a terrible odor.

Lemony Snicket had an unusual education which may or may not explain his ability to evade capture. He is the author of the 13 volumes in A Series of Unfortunate Events, several picture books including The Dark, and the books collectively titled All The Wrong Questions.

Brett Helquist's celebrated art has graced books from the charming Bedtime for Bear, which he also wrote, to the New York Times–bestselling A Series of Unfortunate Events by Lemony Snicket to the glorious picture book adaptation of Charles Dickens's A Christmas Carol. He lives with his family in Brooklyn, New York.

Praise for A Series of Unfortunate Events: “Hilarious. Luckily for fans, the woes of the Baudelaires are far from over.” — Publishers Weekly (starred review)

“Those who enjoy a little poison in their porridge will find it wicked good fun.” — Kirkus Reviews

“With a cast of unforgettable characters, a distinctly literary air, and plenty of laugh-out-loud moments, this is a great match for dark comedy fans.” — Brightly