The Lay of the Land: A Self-Taught Photographer's Journey to Find Faith, Love, and Happiness (Hardcover) 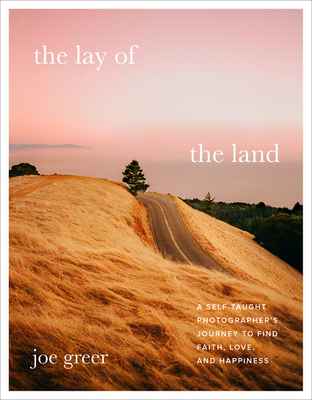 The Lay of the Land: A Self-Taught Photographer's Journey to Find Faith, Love, and Happiness (Hardcover)

“Each photograph really does come down to a split second when you decide to freeze that moment in time. . . . You ask yourself what the story is that you want to tell, and let the rest unfold: Click.”—from the introduction

Joe Greer never imagined he would become a photographer.

Raised in Florida by an aunt and uncle after his mother’s death when he was four, Joe had a seemingly normal childhood, spending summers at church camp and dreaming of going to college. But nearly fifteen years later, the ground shifted beneath his feet when he discovered a family secret that would impact the rest of his life.

Trying to make sense of that revelation and what it meant for his future, Greer set his sights on becoming a pastor at Spokane’s Moody Bible Institute. There, he discovered Instagram—and a passion for photography. His pictures of the lush, wild beauty of the Pacific Northwest landscape attracted a large following that has grown to more than three quarters of a millions fans and continues to expand.

The Lay of the Land is Joe’s story in words and pictures. In this stunning compendium, he reflects on the trauma of his early life and what photography has taught him: how to find his light; how to slow down; how to appreciate the world around him, a reverence for the nature world that that both nurtures and amplifies his creativity and faith; how to love—his photography led him to his wife, Madison—and how to heal. For Joe, photography has been a way to find purpose, better understand his faith, and express himself. Though he began with landscapes, meeting his wife sparked a new love of portraiture, and he turned to making photos of street scenes that explored his complicated feelings about family.

A love letter to the natural world, to faith, and to finding your calling in the most unexpected places, The Lay of the Land is a window into the beautiful mind and heart of one of the internet’s favorite photographers. Moving and inspiring, it is a creative and spiritual journey that offers lessons on life and living. As Greer reminds us all, whatever it is you want, it’s up to you to make the moment (and the photograph).

Born in Michigan and raised in Florida, JOE GREER has been making photographs ever since he went to college in Spokane, Washington. Since going freelance, he has been able to pursue his passion for photography and travel the world. He has lived in Colorado, Oregon, and New York, and along the way has worked for companies including Apple and VSCO. Now, he and his wife, Madison—along with their dog, Crosby—live in Nashville, Tennessee.