Deaf Utopia: A Memoir—and a Love Letter to a Way of Life (Hardcover) 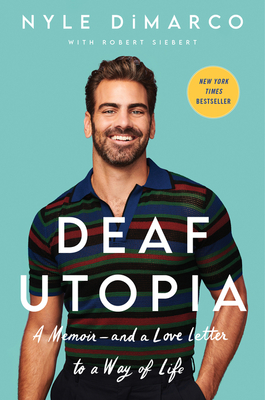 Deaf Utopia: A Memoir—and a Love Letter to a Way of Life (Hardcover)

Before becoming the actor, producer, advocate, and model that people know today, Nyle DiMarco was half of a pair of Deaf twins born to a multi-generational Deaf family in Queens, New York. At the hospital one day after he was born, Nyle “failed” his first test—a hearing test—to the joy and excitement of his parents.

In this engrossing memoir, Nyle shares stories, both heartbreaking and humorous, of what it means to navigate a world built for hearing people. From growing up in a rough-and-tumble childhood in Queens with his big and loving Italian-American family to where he is now, Nyle has always been driven to explore beyond the boundaries given him. A college math major and athlete at Gallaudet—the famed university for the Deaf in Washington, DC—Nyle was drawn as a young man to acting, and dove headfirst into the reality show competitions America’s Next Top Model and Dancing with the Stars—ultimately winning both competitions.

Deaf Utopia is more than a memoir, it is a cultural anthem—a proud and defiant song of Deaf culture and a love letter to American Sign Language, Nyle’s primary language. Through his stories and those of his Deaf brothers, parents, and grandparents, Nyle opens many windows into the Deaf experience.

Deaf Utopia is intimate, suspenseful, hilarious, eye-opening, and smart—both a memoir and a celebration of what makes Deaf culture unique and beautiful.

Advocate, producer, actor, and model Nyle DiMarco has been breaking down barriers and winning over audiences since 2014, when he was a fan favorite on cycle 22 of America’s Next Top Model and became the second male winner and first Deaf contestant on the series. The following year, partnered with Peta Murgatroyd, he took home the coveted mirror ball trophy on season 22 of ABC’s Dancing with the Stars. Nyle’s acting credits include roles on Difficult People, Switched at Birth, This Close, and Station 19 and he served as executive producer on the Netflix docuseries Deaf U. He is passionate in his work as founder of The Nyle DiMarco Foundation, which focuses on bilingual education and aims to improve access to accurate information about early language acquisition. He lives in Washington, DC.

A frequent writing collaborator of Nyle’s, Robert Siebert is also the author of the story “Chocolate Chip,” published in Deaf Lit Extravaganza, which was edited by celebrated DeafBlind poet John Lee Clark. Robert holds degrees from Gallaudet University and resides in Maryland with his fiancée and their two boys.

“A cheerful but sobering account of [DiMarco’s] life so far, peppered throughout with a broad-strokes history of Deaf persecution and advancement. . . . Genuinely informative, and rather ambitious as far as celebrity memoirs go. He does not see himself not as some kind of unicorn, that rare Deaf celebrity to gain a foothold in the hearing world, but as part of an intergenerational struggle.” — New York Times

“Nyle DiMarco welcomes you to his world. . . . his book covers the harmonious and heartbreaking parts of his childhood. . . . The book also serves as an education for readers who may not know key facts about Deaf people or moments in Deaf history. . . .Something tells us we'll all be living in DiMarco's 'Deaf Utopia' soon enough.” — USA Today

“Activist and model DiMarco debuts with an immensely inspiring story of the experiences, people, and culture that made him ‘the proud Deaf man I am today.’ Expertly weaving in seminal moments from Deaf history. . . . This exuberant account isn’t to be missed.” — Publishers Weekly (starred review)

“Unique and vividly written, the memoir effectively serves a dual purpose: to showcase the author’s life and exuberant pride as a Deaf individual and to bring increased awareness to the Deaf community by spotlighting ‘the beauty, power, [and] magic of ASL.’ An honest, heartfelt, and thoroughly memorable portrayal of growing up Deaf.” — Kirkus Reviews (starred review)

“An eye-opening and engaging tale of what it is like to grow up in the Deaf community. . . . DiMarco’s memories, told with a true gift of storytelling and filled with his big personality, are funny and enlightening for any reader.” — Library Journal (starred review)

“DiMarco’s pride in his Deaf community radiates from every page of Deaf Utopia. . . . [This book] is generous to its hearing readers . . . and it takes the unique step of conveying ASL conversations that employ the grammar and rhythms of ASL as far as possible. . . . This joyful memoir celebrates DiMarco’s ambition and adaptability, his journey to understand his queerness, and the vibrant Deaf community that made him who he is.” — Booklist