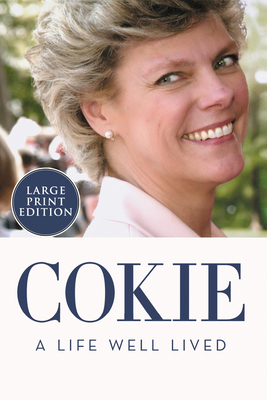 The extraordinary life and legacy of legendary journalist Cokie Roberts—a trailblazer for women—remembered by her friends and family.

Through her visibility and celebrity, Cokie Roberts was an inspiration and a role model for innumerable women and girls. A fixture on national television and radio for more than 40 years, she also wrote five bestselling books focusing on the role of women in American history. She was portrayed on Saturday Night Live, name checked on the West Wing, and featured on magazine covers. She joked with Jay Leno, balanced a pencil on her nose for David Letterman, and was the answer to numerous crossword puzzle clues. Many dogs, and at least one dairy cow, were named for her. When the legendary 1980s Spy Magazine ran a diagram documenting all her connections with the headline “Cokie Roberts – Moderately Well-Known Broadcast Journalist or Center of the Universe?” they were only half-joking.

Cokie had many roles in her lifetime: Daughter. Wife. Mother. Journalist. Advocate. Historian. Reflecting on her life, those closest to her remember her impressive mind, impish wit, infectious laugh, and the tenacity that sent her career skyrocketing through glass ceilings at NPR and ABC. They marvel at how she often put others before herself and cared deeply about the world around her. When faced with daily decisions and dilemmas, many still ask themselves the question, ‘What Would Cokie Do?’

In this loving tribute, Cokie’s husband of 53 years and bestselling-coauthor Steve Roberts reflects not only on her many accomplishments, but on how she lived each day with a devotion to helping others. For Steve, Cokie’s private life was as significant and inspirational as her public one. Her commitment to celebrating and supporting other women was evident in everything she did, and her generosity and passion drove her personal and professional endeavors. In Cokie, he has a simple goal: “To tell stories. Some will make you cheer or laugh or cry. And some, I hope, will inspire you to be more like Cokie, to be a good person, to lead a good life.”

Steve Roberts has been a journalist for more than fifty years. He is the author of My Father’s House and From This Day Forward, which he cowrote with Cokie. He is the chief political analyst for the ABC radio network, a professor of journalism and politics at George Washington University, and a nationally syndicated columnist. He lives in Cokie’s childhood home in suburban Washington, which he and Cokie shared for forty-two years.

"A moving testimony of the remarkable life and legacy of his wife, trailblazing journalist Cokie (1943–2019). Through depictions of her faith, family, work, writing, and friendships, Roberts shares engrossing anecdotes about his partner from their over 50 years together. . . . This loving tribute is likely to gain the celebrated journalist a whole new crop of fans."  — Publishers Weekly, starred review

"Demonstrates . . . both the painful loss and the rich and enduring legacy of this pioneering journalist and compassionate human being."  — Booklist

"An upbeat portrait of a productive life that was so important to journalists and women everywhere."  — Kirkus