Render Unto Caesar: The Struggle Over Christ and Culture in the New Testament (Hardcover) 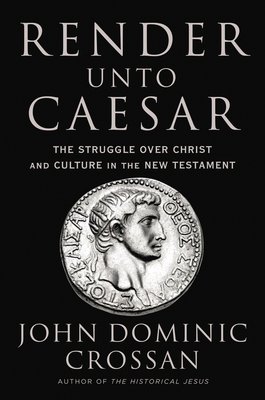 Render Unto Caesar: The Struggle Over Christ and Culture in the New Testament (Hardcover)

The revered Bible scholar and author of The Historical Jesus explores the Christian culture wars—the debates over church and state—from a biblical perspective, exploring the earliest tensions evident in the New Testament, and offering a way forward for Christians today.

Leading Bible scholar John Dominic Crossan, the author of the pioneering work The Historical Jesus, provides new insight into the Christian culture wars which began in the New Testament and persist strongly today.

For decades, Americans have been divided on how Christians should relate to government and lawmakers, a dispute that has impacted every area of society and grown more rancorous over the past forty years. But as Crossan makes clear, this debate isn’t new; it can be found in the New Testament itself, most notably in the tensions between Luke-Acts and Revelation.

In the texts of Luke-Acts, Rome is considered favorably. In the book of Revelation, Rome is seen as the embodiment of evil in the world. Yet there is an alternative to these two extremes, Crossan explains. The historical Jesus and Paul, the earliest Christian teachers, were both strongly opposed to Rome, yet neither demonized the Empire.

Crossan sees in Jesus and Paul’s approach a model for Christians today that can be used to cut through the acrimony and polarization roiling our society and dividing us.

John Dominic Crossan, professor emeritus at DePaul University, is widely regarded as the foremost historical Jesus scholar of our time. He is the author of several bestselling books, including The Historical Jesus, How to Read the Bible and Still Be a Christian, God and Empire, Jesus: A Revolutionary Biography, The Greatest Prayer, The Last Week, and The Power of Parable. He lives in Minneola, Florida.

“Unmasking the dangerous cultural accommodations of Luke, revealing the equally dangerous cultural demonizing of John’s Apocalypse, and recovering the non-violent, family-based teachings of Jesus, this inspired volume moves from history to ethics and from first-century Rome to twenty-first century America. Vintage Crossan: poetic, principled, passionate, and powerful.”  — Amy-Jill Levine, author of The Bible With and Without Jesus and The Misunderstood Jew, Professor of New Testament and Jewish Studies and Mary Jane Werthan Professor of Jewish Studies at Vanderbilt Divinity School

"Captivating. Render Unto Caesar is accessible, and inspiring, a true gift to modern people of faith. Crossan’s signature historical analysis provides insights into our modern cultural divisions, showing how modern Christians can work to resist corrupt governments and reform our society for the common good."  — Brandan Robertson, Activist and Author, Filled to Be Emptied: The Path of Liberation for Privileged People

"This stimulating history examines first-century clashes between the Christian church and Roman state [and] is an illuminating exploration of how Christians might relate to broader society, written with style, panache, and accessible erudition." — Publishers Weekly