This Will Be Funny Later: A Memoir (Hardcover) 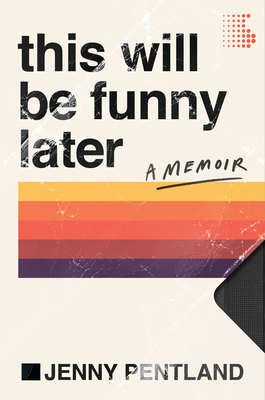 This Will Be Funny Later: A Memoir (Hardcover)

A funny, biting, and entertaining memoir of coming of age in the shadow of celebrity and finding your own way in the face of absolute chaos that is both a moving portrait of a complicated family and an exploration of the cost of fame.

Growing up, Jenny Pentland’s life was a literal sitcom. Many of the storylines for her mother’s smash hit series, Roseanne, were drawn from Pentland’s early family life in working-class Denver. But that was only the beginning of the drama. Roseanne Barr’s success as a comedian catapulted the family from the Rockies to star-studded Hollywood—with its toxic culture of money, celebrity, and prying tabloids that was destabilizing for a child in grade school.

By adolescence, Jenny struggled with anxiety and eating issues. Her parents and new stepfather, struggling to help, responded by sending Jenny and her siblings on a grand tour of the self-help movement of the ’80s—from fat camps to brat camps, wilderness survival programs to drug rehab clinics (even though Jenny didn’t take drugs). Becoming an adult, all Jenny wanted was to get married and have kids, despite Roseanne’s admonishments not to limit herself to being just a wife and mother.

In this scathingly funny and moving memoir, Pentland reveals what it’s like to grow up as the daughter of a television star and how she navigated the turmoil, eventually finding her own path. Now happily married and raising five sons on a farm, Pentland has worked tirelessly to create the stable family she never had, while coming to terms at last with her deep-seated anxiety.

This Will Be Funny Later is a darkly funny and frank chronicle of transition, from childhood to adulthood and motherhood—one woman’s journey to define herself and create the life she always wanted.

Jenny Pentland is a writer, mother, and hobby farmer. The daughter of Roseanne Barr, she, along with her sister, inspired the characters Becky and Darlene on her mother’s long-running eponymous television series Roseanne. Pentland and her family live in Hawaii.

“Jenny Pentland tells her mostly very funny story with wisdom and heart, and her devotion to the concept of family, even with all its challenges, is just plain inspirational. I love this book!” — Andy Richter

“Jenny Pentland’s This Will Be Funny is a helluva ride—raw, hysterically funny, and beautifully human. Jenny has gracefully pulled back the curtain on what life as a ‘daughter of’ is like in order to step fully into her power and voice. She is an astute cultural observer, sharp bullshit detector, and genius wordsmith. The world needs more of her medicine. Take a big gulp.” — Kelly Carlin

“Jenny Pentland is a brilliant, engaging, and hilarious writer. Her stories give rich details of a world many of us will never know. I laughed out loud many times and simultaneously felt so much empathy for her unique life story.” — Christina Pazsitzky

“Jenny Pentland has had extraordinary experiences in a life that has been a thousand miles away from typical. It's a credit to her incredible talent as a writer that she can make all of it completely human and relatable. This Will Be Funny Later is a wonderful read whether you've had your family distorted and put on primetime or not.” — John Moe

“This Will Be Funny Later is hilarious, heartbreaking, and deftly written. Jenny pulls you in like an old friend and lays out her life with wit and guts. I just wanted to keep on reading. She wrote the hell out of this book.” — Karen Kilgariff

“This Will Be Funny Later is equal parts hilarious, poignant, and horrifying. This book will cure you of any desire to be famous or famous-adjacent." — Alice Bradley

“This Will Be Funny Later is an honest, hilarious read by the sharp and poignant Jenny Pentland. Don’t put it down.” — Kelly Oxford

“Jenny Pentland’s just-out tour de force. . . [is] the memoir of one of Roseanne Barr’s daughters, yes, but it’s also a vicious take on the insanity of celebrity culture from inside the bubble; it’s a harrowing recovery memoir that doesn’t look for the easy way out; on top of all that (and that’s a lot), it’s also wildly and darkly funny. . . .The fact that This Will Be Funny Later doesn’t assign easy blame, doesn’t rely on the soothing platitudes of recovery-speak, and doesn’t fail to find the humor in the insanity is a kind of grace note.”  — Vogue

"Pentland has a scathing, unapologetic wit, and it’s on full display throughout her chronicle of navigating the 'parallel-reality version' of her tumultuous adolescence and eventually finding her real-life happily-ever-after with her husband and sons. This intimate portrayal of the dark side of Hollywood is hard to put down." — Publishers Weekly

“This complex, scathingly funny memoir about dealing with the toxic glow of fame offers an intimate look at a woman’s struggle to shape a life on her own terms. . . . A mordantly poignant memoir of finding oneself amid hectic external forces.” — Kirkus Reviews

“Bracingly honest and mordantly funny . . . Pentland’s account of life with her family is also full of warmth and especially humor." — USA Today

"The daughter of comedian Roseanne Barr recounts her unusual childhood with humor and self-deprecation . . . Offers plenty of heart and laughs, especially for children of the 1980s and 1990s." — Booklist

"The best memoir this reviewer has read in many years, is a biting, bittersweet, and absolutely brilliant MUST-READ, chock full of life lessons." — New York Journal of Books

"The hilarious memoir, by turns scorching and poignant, reveals what’s like to have one of America’s funniest comedians—Roseanne Barr—for a mother." — Lilith

"A story about both heart and heartbreak. — Washington Independent Review of Books