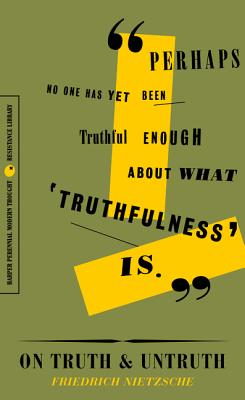 “We continue to live within the intellectual shadow cast by Nietzsche.”—New York Times Book Review

Reissued for the age of "fake news," On Truth and Untruth charts Nietzsche’s evolving thinking on truth, which has exerted a powerful influence over modern and contemporary thought. This original collection features the complete text of the celebrated early essay “On Truth and Lies in a Nonmoral Sense” (”a keystone in Nietzsche’s thought”—Stanford Encyclopedia of Philosophy), as well as selections from the great philosopher’s entire career, including key passages from The Gay Science, Beyond Good and Evil, On the Genealogy of Morals, The Will to Power, Twilight of the Idols, and The Antichrist.

In times of crisis, the great works of philosophy help us make sense of the world. The Harper Perennial Resistance Library is a special five-book series highlighting short classic works of independent thought that illuminate the nature of truth, humanity's dangerous attraction to authoritarianism, the influence of media and mass communication, and the philosophy of resistance—all critical in understanding today's politically charged world.

Friedrich Nietzsche was a German philosopher and author. Born into a line of Protestant churchman, Nietzsche studied Classical literature and language before becoming a professor at the University of Basel in Switzerland. He became a philosopher after reading Schopenhauer, who suggested that God does not exist, and that life is filled with pain and suffering. Nietzsche’s first work of prominence was The Birth of Tragedy in 1872, which contained new theories regarding the origins of classical Greek culture. From 1883 to 1885 Nietzsche composed his most famous work, Thus Spake Zarathustra, in which he famously proclaimed that “God is dead.” He went on to release several more notable works including Beyond Good and Evil and The Genealogy of Morals, both of which dealt with the origins of moral values. Nietzsche suffered a nervous breakdown in 1889 and passed away in 1900, but not before giving us his most famous quote, “From life's school of war: what does not kill me makes me stronger.”