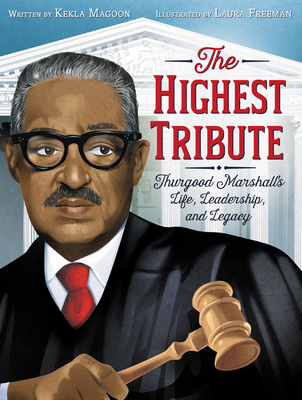 A brilliant picture book biography about Thurgood Marshall, who fought for equality during the Civil Rights Movement and served as the first Black justice on the Supreme Court, from Coretta Scott King Honor winners Kekla Magoon and Laura Freeman.

Growing up in Baltimore, Thurgood Marshall could see that things weren’t fair. The laws said that Black and white people couldn’t use the same schools, parks, or water fountains.

When Thurgood had to read the Constitution as punishment for a prank at school, his eyes were opened. It was clear to him that Jim Crow laws were wrong, and he was willing to do whatever it took to change them.

His determination to make sure all Americans were treated equally led him to law school and then the NAACP, where he argued cases like Brown v. Board of Education in front of the Supreme Court. But to become a Justice on the highest court in the land, Thurgood had to make space for himself every step of the way.

Kekla Magoon is the author of many novels and nonfiction books, including The Rock and the River, How It Went Down, The Season of Styx Malone, and Revolution in Our Time: The Black Panther Party’s Promise to the People. Kekla received the 2021 Margaret A. Edwards Award for significant and lasting contribution to young adult literature. She has been a National Book Award Finalist in addition to receiving an NAACP Image Award, the Boston Globe-Horn Book Award, a Printz Honor, four Coretta Scott King Honors, and two Walter Award Honors. Kekla teaches writing for children and young adults at Vermont College of Fine Arts. Visit her online at www.keklamagoon.com.

Laura Freeman received her BFA from the School of Visual Arts in New York City and began her career illustrating for various editorial clients. Laura has illustrated many fine children’s books over the years, including Fancy Party Gowns: The Story of Fashion Designer Ann Cole Lowe, written by Deborah Blumenthal, and the Coretta Scott King Honor Book Hidden Figures: The True Story of Four Black Women and the Space Race, by Margot Lee Shetterly. Laura now lives in Atlanta, Georgia, with her husband and their two children. Find out more about Laura at www.lfreemanart.com.

“Will serve to empower children who feel as powerless as Thurgood Marshall once felt.” — Kirkus Reviews (starred review)

“The crystal-clear and accessible text, focusing on essential cases in the career of “Mr. Civil Rights,” does justice to the Justice.” — Horn Book (starred review)

“An appealing read about a Black figure who had a large and lasting impact on U.S. law.” — Publishers Weekly (starred review)

“Short, straight-to-the-facts sentences, accessible to newly independent readers, are equally effective for group readalouds, and the stately cadence of the narration is matched by Freeman’s digital artwork.” — Bulletin of the Center for Children’s Books

"A handsome, well-organized account of Marshall’s life and work." — Booklist