A Soft Place to Land (Hardcover) 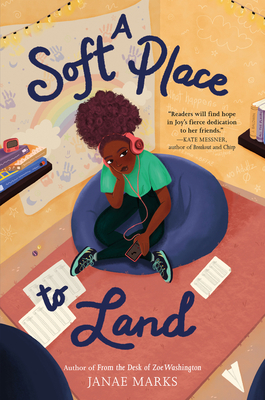 A Soft Place to Land (Hardcover)

“Joyful. A book that kids will love.” —Rebecca Stead, Newbery Medal-winning author of When You Reach Me

Joy Taylor has always believed home is the house she lived in her entire life. But then her dad lost his job, and suddenly, home becomes a tiny apartment with thin walls, shared bedrooms, and a place for tense arguments between Mom and Dad. Hardest of all, Joy doesn’t have her music to escape through anymore. Without enough funds, her dreams of becoming a great pianist—and one day, a film score composer—have been put on hold.

A friendly new neighbor her age lets Joy in on the complex’s best-kept secret: the Hideout, a cozy refuge that only the kids know about. And it’s in this little hideaway that Joy starts exchanging secret messages with another kid in the building who also seems to be struggling, until—abruptly, they stop writing back. What if they’re in trouble?

Joy is determined to find out who this mystery writer is, fast, but between trying to raise funds for her music lessons, keeping on a brave face for her little sister, and worrying about her parents’ marriage, Joy isn’t sure how to keep her own head above water.

"Squeezes your heart in such a special way." —Lisa Moore Ramée, author of A Good Kind of Trouble and Something to Say

“Readers will find hope in Joy’s courage, ingenuity, and fierce dedication to her friends.” —Kate Messner, author of Breakout and Chirp

“A timely story about connection, loss and the spaces we need to understand one and brave the other.” —Paula Chase, author of Dough Boys and So Done

Janae Marks is the author of the critically acclaimed novel From the Desk of Zoe Washington. She grew up in the New York City suburbs and now lives in Connecticut with her husband and daughter. She has an MFA in writing for children from the New School. Visit Janae online at www.janaemarks.com.

“Blending mystery with realistic fiction, Joy’s story of how complicated life is for a kid will resonate with readers in tender and poignant ways.”  — Booklist (starred review)

"At turns poignant and affirmative, this sophomore novel by Marks (From the Desk of Zoe Washington) imparts invaluable messages on growing up, being honest, and communicating feelings to loved ones." — Publishers Weekly (starred review)

"This relatable story touches on topics such as divorce (Joy's parents briefly separate, then reconcile), the ups and downs of having a job at a young age, and the difficulties that arise from keeping secrets from family and friends. . . There is a diverse cast of characters with different experience . . . VERDICT An engaging coming-of-age story that will appeal to a wide range of readers." — School Library Journal

"This poignant look at friendship, loss, and facing consequences hits all the right notes. It will squeeze your heart in such a special way. Marks tenderly blends mystery, compassion and the highs and lows of friendship in a perfect melody. A Soft Place to Land will have readers cheering for Joy and longing for a hideout of their very own." — Lisa Moore Ramée, author of A Good Kind of Trouble and Something to Say

“A wonderfully timely story about connection, loss and the spaces we need to understand one and brave the other.” — Paula Chase, author of Dough Boys and So Done

“A joyful story about the power of being kind and sticking together when life gets bumpy. A Soft Place to Land is a book that kids will love.”  — Rebecca Stead, Newbery Award-winning author of When You Reach Me

“A Soft Place to Land perfectly captures how complicated it is to be a kid. Readers who have faced times of change and uncertainty of their own will recognize themselves in Joy and find hope in her courage, her ingenuity, and her fierce dedication to her friends.” — Kate Messner, author of Breakout and Chirp

"A bittersweet story of silent perseverance and kids working for themselves." — Kirkus Reviews

Praise for From the Desk of Zoe Washington: “How could someone innocent end up in prison? With the help of her grandmother and her friend Trevor, Zoe begins to learn about systemic racism and how black people…are more likely to be wrongfully convicted of murder than white people. This powerful debut packs both depth and sweetness, tackling a tough topic in a sensitive, compelling way. An extraordinary, timely, must-read debut about love, family, friendship, and justice.” — Kirkus Reviews (starred review)

"This exceptionally sweet debut from Marks illustrates profound cracks in the American criminal justice system while telling an affecting story grounded in the middle-grade experience. The troubling ways race affects the characters…will facilitate important conversations about racial profiling and incarceration rates for people of color. Fortunately, Marks’ capable storytelling and engaging characters also combine into a wondrous confection of a book, full of heart and hope and promise.”  — Booklist (starred review)

“Marks delivers a spirited central character whose determination to get to the truth is admirable. An involving family story, this novel could also serve as an introduction to social justice for elementary schoolers." — Bulletin of the Center for Children’s Books

"Never heavy-handed, Marks’ prose is as sweet as one of Zoe’s confections. And as the icing on the cake, From the Desk of Zoe Washington imparts important lessons about judging other people, whether by the color of their skin or by their presumed guilt or innocence." — BookPage

“Marks doesn’t downplay the immense impact of mass incarceration on communities of color, but neither does she dramatize it, allowing the reader to focus, instead, on Zoe’s discovery of the amazing work of the Innocence Project, and the bittersweet blossoming of her relationship with her birth father. From the Desk of Zoe Washington tackles the complex costs of the pursuit of justice and motivates readers to feel equipped—and energized—to stand up for what’s right, right now. Readers will recognize that, like Zoe Washington, they need not wait until they grow up to make their actions count.” — Tanita S. Davis, author of Mare’s War

“A delightful confection of a novel! Zoe is a wondrous heroine who inspires a deeper love for food, family, and friends. Advocating for social justice, she creates a new recipe for a better, sweeter world. An enticing and enthralling debut from Janae Marks.” — Jewell Parker Rhodes, New York Times bestselling author of Ghost Boys

“A touching, tender, and absorbing read!” — Jodi Kendall, author of The Unlikely Story of a Pig in the City

“With a dash of mystery, sprinkle of passion, and whole lot of heart, From the Desk of Zoe Washington has found a winning recipe.” — Coe Booth, author of Kinda Like Brothers

"[A] marvelous debut novel by Janae Marks for middle-grade readers... a compelling mystery... Marks has managed to write a middle-grade novel that explores racial justice issues and addresses the routine bias Zoe faces while also dealing with coming-of-age issues... The book serves as a valuable introduction to The Innocence Project for its target audience." — Buffalo News

“Marks has a keen eye and ear for the telling particulars of the family’s struggle to forge ahead in a new setting, and the book is sensitive to everyone’s need for a space to be alone from time to time. Fans will welcome her introduction to another determined and resilient Black tween heroine.”   — Bulletin of the Center for Children’s Books