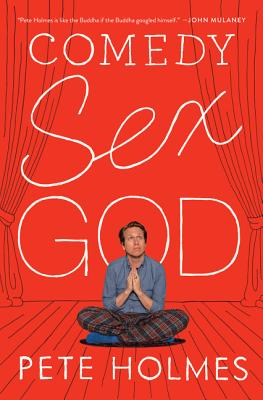 Pete Holmes is a sold-out-every-night stand-up comedian with two HBO specials and the host of the hugely successful podcast You Made It Weird, and he was the creator-star of the hit HBO show Crashing. But it wasn’t always roses for Pete. Growing up, Pete was raised an evangelical Christian, but his religion taught him that being “bad”—smoking, drinking, having doubts or premarital sex—would get him sent to an eternity in hell. So, terrified of the God he loved, Pete devoted his life to being “good,” even marrying his first girlfriend at the age of twenty-two only to discover a few years later he was being cheated on. Thanks for nothing, God.

Pete’s failed attempt at a picture-perfect life forced him to reexamine his beliefs, but neither atheism, nor Christianity, nor copious bottles of Yellow Tail led him to enlightenment. Pete longed for a model of faith that served him and his newfound uncertainties about the universe, so he embarked on a soul-seeking journey that continues to this day. Through encounters with mind-altering substances, honing his craft in front of thousands of his comedy fans, and spending time with savants like Ram Dass, Pete forged a new life—both spiritually and personally.

Beautifully written and often completely hilarious—imagine Dass’s Be Here Now if penned by one of the funniest people alive—Comedy Sex God reveals a man at the top of his game and a seeker in search of the deeper meanings of life, love, and comedy.

Pete Holmes is a comedian, writer, cartoonist, “Christ-leaning spiritual seeker”, and podcast host. His wildly popular podcast, You Made It Weird, is a comedic exploration of the meaning of life with guests ranging from Deepak Chopra and Elizabeth Gilbert to Seth Rogen and Garry Shandling. Pete also created and starred in the semi-autobiographical HBO show Crashing which he executive produced alongside Judd Apatow. An accomplished standup with three hour-long television specials and innumerous late night appearances, he continues to tour regularly to sold-out crowds. He lives with his wife and daughter in LA.

“Pete Holmes is Hunter S. Thompson if he was square as shit and funny as fuck.  Did I swear enough? Pussy?” — Sarah Silverman

“The thing about Pete is that there’s this question he never stops asking in his life and work: What is this? From his standup to his podcast to his talk to show to Crashing, this What is this? question infuses all he does with an existential urgency and a spiritual vitality. This is why so many resonate with him—he’s welcoming everyone in to the ancient practice of asking and seeking and questioning and following it where it leads, insisting that we  join in him in his wonder and awe. He often says We’re on a rock flying through space and he’s tired of not talking about it. Well, this time he’s writing about it, and you’re going to love it.” — Rob Bell, author of Love Wins and What Is The Bible?

“A marvelous and heartfelt story about the journey from role to soul.” — Ram Dass

“Pete Holmes is that rare stand-up comedian who is wickedly sharp without being cynical and joyously exuberant without losing his edge.  In Comedy Sex God, Pete hilariously confronts his faith in a way I would never dare, unless I thought there was real money in it.” — Conan O’Brien

Pete Holmes is a thoughtful and hilarious contradiction. Centered, but ambitious. Zen, but stressed. He’s like the Buddha if the Buddha Googled himself. This memoir captures all the wonderful inconsistencies and strengths of my very funny friend. It was a joy to read. — John Mulaney

Seldom do I read such creative and humorous writing—and have it be so profound and true at the same time. To quote Thomas Merton four days before he died  ‘One day you realize that most of religion is laughable.   And then you realize that you are nevertheless religious.’ Peter Holmes might just be the new Merton! — Richard Rohr, author of The Universal Christ