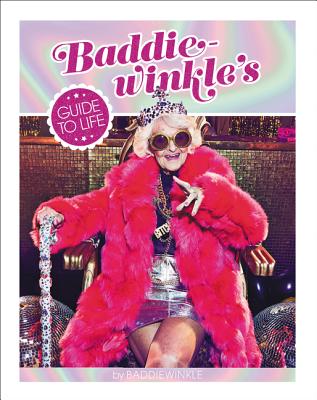 Instagram’s hippest grandma shares her thoughts on living and dressing adventurously in this humorous illustrated guide.

Known for her tie-dye tops, shirts with sayings like "Bye Basic," and giant neon drop earrings, eighty-eight-year-old Baddie Winkle is one of the internet’s hottest stars. The alter-ego of Helen van Winkle, Baddie began with an adventurous makeover. Putting on her great granddaughter’s tie-dye Grateful Dead bears t-shirt, jean shorts, and socks patterned with pink marijuana leaves, Helen posted her first photo of Baddie in April 2014, with the help of her grandkids and great-grandkids. Since then, Baddie’s colorful, youthful style, controversial photos, and snaps with celebrities like Miley Cyrus have earned her the devotion of more than two million Instagram fans and transformed her life. From appearing on MTV’s Video Music Awards and in a Smirnoff commercial, to meeting celebrities and her numerous fans, to traveling the country, dropping in at frat parties, and making a music video, this irrepressibly charming Southern renegade demonstrates it’s never too late to open and enjoy a new chapter in your life.

Imbued with her energetic, infectious spirt and rebellious attitude, Baddiewinkle's Guide to Life is an inspiring handbook for living life adventurously. Baddie tells her life story, including the joys and heartbreak and the lessons she has learned, and shares her thoughts on a wide range of issues, including funky fashion, the internet and pop culture, being age appropriate, and being an octogenarian internet star. Illustrated with dozens of color photos, Baddiewinkle's Guide to Life also features Baddie’s tips on how to be Baddie, her favorite outfits, and other special content sure to delight and inspire fans of all ages.

Hellion, great-grandmother, and internet sensation, Baddiewinkle never asked for fame. It found her. Known for her outrageous fashion choices, including the ability to rock a bikini at the age of eighty-seven, her pioneering spirit, and her outsized love of life, Baddiewinkle is a rousing role model for the young at heart.