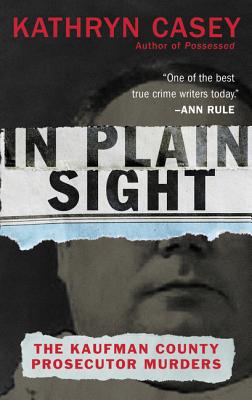 On a cold January morning, the killer executed Assistant District Attorney Mark Hasse in broad daylight. Eight shots fired a block from the Kaufman County Courthouse. Two months later, a massacre. The day before Easter, the couple slept. Bunnies, eggs, a flower centerpiece gracing the table. Death rang their doorbell and filled the air with the rat-a-tat-tat of an assault weapon discharging round after round into their bodies.

Eric Williams and his wife, Kim, celebrated the murders with grilled steaks. Their crimes covered front pages around the world, many saying the killer placed a target square on the back of law enforcement. Williams planned to exact revenge on all those who had wronged him, one at a time. Throughout the spring of 2013, Williams sowed terror through a small Texas town, and a quest for vengeance turned to deadly obsession. His intention? To keep killing, until someone found a way to stop him.

Kathryn Casey is an award-winning journalist, who has written for Rolling Stone, TV Guide, Reader's Digest, Texas Monthly, and many other publications. She's the author of seven previous true crime books and the creator of the highly acclaimed Sarah Armstrong mystery series. Casey has appeared on Oprah, Oprah Winfrey's Oxygen network, Biography, Nancy Grace, E! network, truTV, Investigation Discovery, the Travel Channel, and A&E. She lives in Houston with her husband and their dog, Nelson.

“A deft and compelling crime narrative... Bristling with intrigue, In Plain Sight takes us into the minds of justice officials who must identify and catch the person targeting them before more of them are killed.” — Katherine Ramsland, bestselling author of Confession of a Serial Killer: The Untold Story of Dennis Rader, the BTK Killer

“Kathryn Casey’s exploration of a small-town good citizen turned vengeful killer is told with such creeping suspense that it reads like a crime novel. But the fact that it’s real makes it far more chilling, vivid, and even horrifying exploration of the making of a murderer.”     — Deborah Blum, author of The Poisoner’s Handbook

“Kathryn Casey is one of the best in the true crime genre!” — New York Times bestselling author Ann Rule

“Casey stakes her claim as one of the best in the business.” — M. William Phelps, author of Love Her to Death