Cyber War: The Next Threat to National Security and What to Do About It (Paperback) 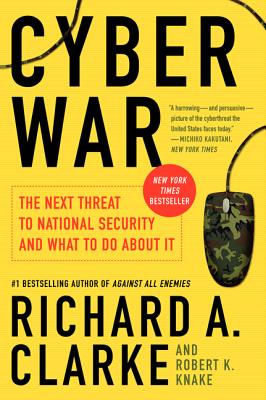 Cyber War: The Next Threat to National Security and What to Do About It (Paperback)

By Richard A. Clarke, Robert Knake

An essential, eye-opening book about cyberterrorism, cyber war, and the next great threat to our national security.

“Cyber War may be the most important book about national security policy in the last several years.” –Slate

Former presidential advisor and counter-terrorism expert Richard A. Clarke sounds a timely and chilling warning about America’s vulnerability in a terrifying new international conflict. Cyber War is a powerful book about technology, government, and military strategy; about criminals, spies, soldiers, and hackers. It explains clearly and convincingly what cyber war is, and how vulnerable we are as a nation and as individuals to the vast and looming web of cyber criminals.

Every concerned American should read this startling and explosive book that offers an insider’s view of White House ‘Situation Room’ operations and carries the reader to the frontlines of our cyber defense. Cyber War exposes a virulent threat to our nation’s security.

Richard A. Clarke, a veteran of thirty years in national security and over a decade in the White House, is now the CEO of a cyber-security consulting firm. He is the author of seven previous books, including the bestsellers Against All Enemies and Cyber War.

“Clarke and Knake are right to sound the alarm.” — Wall Street Journal

“[CYBER WAR] may be the most important book about national-security policy in the last several years.” — Slate

“In this chilling and eye-opening book, Clarke and Knake provide a highly detailed yet accessible look at how cyber warfare is being waged and the need to rethink our national security to face this new threat.” — Booklist

“Will strengthen Clarke’s claims as one of the founding fathers of cybersecurocracy....It is worth buying this book if only for his pithy five-page vision of this coming apocalypse and a return to stone-age conditions within a week, all because of a few pesky hackers and viruses.” — Financial Times