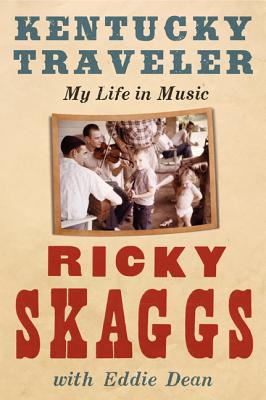 In Kentucky Traveler, Ricky Skaggs, the music legend who revived modern bluegrass music, gives a warm, honest, one-of-a-kind memoir of forty years in music—along with the Ten Commandments of Bluegrass, as handed down by Ricky’s mentor Bill Monroe; the Essential Guide to Bedrock Country Songs, a lovingly compiled walk through the songs that have moved Skaggs the most throughout his life; Songs the Lord Taught Us, a primer on Skaggs’s most essential gospel songs; and a bevy of personal snapshots of his musical heroes.

For readers of Johnny Cash’s autobiography, lovers of O Brother Where Art Thou, and fans of country music and bluegrass, Kentucky Traveler is a priceless look at America’s most cherished and vibrant musical tradition through the eyes of someone who has lived it.

Ricky Skaggs is one of the most prominent singers and musicians in the history of bluegrass and country music. He is a perennial Grammy Award-winner and continues to make records and tour with his band, Kentucky Thunder.

Eddie Dean is a veteran music journalist whose previous books include Man of Constant Sorrow: My Life and Times, cowritten with Dr. Ralph Stanley.

“[Skaggs’] career has been a matter of following a God-given calling.…He tells the stories of the first half of his life and of the rest, too, with natural enthusiasm, innate good nature, and an unflagging, positive Christian spirit.” — Booklist (starred review)