Brave Girl: Clara and the Shirtwaist Makers' Strike of 1909 (Hardcover) 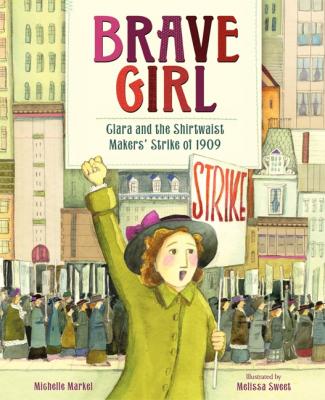 Brave Girl: Clara and the Shirtwaist Makers' Strike of 1909 (Hardcover)

“Immigrant Clara Lemlich finds herself working in appalling conditions in a shirt-making factory in New York City. Rather than accept her fate, Clara joins fellow workers in striking against the company and their conditions. What begins small spreads throughout the country. This is an excellent historical portrayal that does justice to the immigrant work experience.”
— Meaghan Beasley, Island Bookstore, Duck, NC

The true story of the young immigrant who led the largest strike of women workers in U.S. history. This picture book biography about the plight of immigrants in America in the early 1900s and the timeless fight for equality and justice should not be missed.

When Clara arrived in America, she couldn't speak English. She didn't know that young women had to go to work, that they traded an education for long hours of labor, that she was expected to grow up fast.

But that didn't stop Clara. She went to night school, spent hours studying English, and helped support her family by sewing in a shirtwaist factory.

Clara never quit, and she never accepted that girls should be treated poorly and paid little. Fed up with the mistreatment of her fellow laborers, Clara led the largest walkout of women workers the country had seen.

From her short time in America, Clara learned that everyone deserved a fair chance. That you had to stand together and fight for what you wanted. And, most importantly, that you could do anything you put your mind to.

This picture book biography about Ukrainian immigrant Clara Lemlich tackles topics like activism and the U.S. garment industry. The art, by Caldecott Honor winner Melissa Sweet, beautifully incorporates stitching and fabric. A bibliography and an author's note on the garment industry are included.

Michelle Markel loves writing narrative nonfiction. She’s the author of Brave Girl, which won the Bank Street Flora Stieglitz Straus Award and the Jane Addams Children’s Book Award for Younger Children, and was also chosen as an NCTE Orbis Pictus Honor Book. Her recent titles are Hillary Rodham Clinton: Some Girls Are Born to Lead (on the Amelia Bloomer Project List of feminist literature) and Balderdash!: John Newbery and the Boisterous Birth of Children’s Books. She lives in Woodland Hills, California. You can visit her online at www.michellemarkel.com.

Melissa Sweet has illustrated more than one hundred books. Her work has been in magazines, on greeting cards, and on her living room walls. Melissa has received the Caldecott Honor Medal twice, among many other awards, including the Sibert Medal, and is a New York Times bestselling author and artist. Melissa lives in Maine. You can visit her at www.melissasweet.net.

“The zingy images masterfully (and appropriately) incorporate fabric and stitches as well as old images of checks and time cards … This book has fighting spirit in spades-you go, Clara!” — Booklist (starred review)

“Readers are treated to solid information with a buoyant message about standing up for what is right. Sweet has created an outstanding backdrop for Markel’s text with a vibrant collage of watercolor, gouache, blank dress-pattern paper, bookkeeping pages, stitches, and fabric pieces.” — School Library Journal (starred review)

“Sweet incorporates images of assorted fabrics and stitch patterns into her tender illustrations, brightening the lives of workers whose reality was bleak.” — Publishers Weekly (starred review)

“In her simple but powerful text Markel shows how multiple arrests, serious physical attacks, and endless misogyny failed to deter this remarkable woman as she set off on her lifelong path as a union activist.” — The Horn Book

“Markel ably brings to life the plight of immigrant garment workers and Clara’s courageous advocacy.” — Bulletin of the Center for Children’s Books