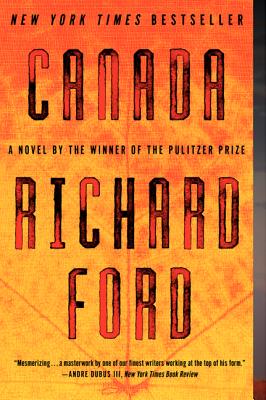 “Canada, Richard Ford's long-awaited new novel, is not one to be rushed. While the plot sounds sensational -- robbery, murders, a flight across the Canadian border -- Ford's laconic, measured prose forces the reader to slow the pace and savor the story. This is a novel about actions, intentions, and consequences as well as about belonging, introspection, and the solitary nature of life. Powerful and atmospheric, Canada will excite and gratify Ford's fans and introduce newcomers to a masterful American writer.”
— Tova Beiser, Brown University Bookstore, Providence, RI

"First, I’ll tell about the robbery our parents committed. Then the murders, which happened later.”

So begins Canada, the unforgettable story of a boy attempting to find grace, written by the only writer in history to win both the Pulitzer Prize and Pen/Faulkner Award for a single novel.

This is the story of Dell Parsons, whose parents rob a bank and fracture his life into a before and an after, crossing the threshold that cannot be uncrossed.  After his parents’ arrest and imprisonment, Del and Berner, his twin sister, face a blank future of foster care and social services visits. Berner, willful and burning with anger, runs away – orphaning Del completely.

In the midst of his abandonment, a family friend intervenes, spiriting Del across the Montana/Saskatchewan border. There, in a dilapidated town floating in the sea of the Canadian prairie, he’s taken in by Arthur Remlinger – an enigmatic, charismatic man whose own past exists on the other side of a similarly uncrossable border.

Undone by the calamity of his parents’ robbery, Del struggles under the vastness of the prairie sky and the stark, unforgiving landscape to realign his sense of self and his perception of the parents he thought he knew, even as he moves on an inexorable collision course with the slow-simmering violence trembling just beneath Arthur Remlinger’s cool reserve.

A resonant and luminous masterwork of haunting and spectacular vision, CANADA is an elemental novel of boundaries traversed, innocence lost, and of the mysterious and powerful bonds of family. Told in spare, elegant prose but rich with emotional clarity, lyrical precision, and an acute sense of the grandeur of living, it is a masterpiece from one of the greatest American writers alive.

Richard Ford is the author of The Sportswriter; Independence Day, winner of the Pulitzer Prize and the PEN/Faulkner Award; The Lay of the Land; and the New York Times bestseller Canada. His short story collections include the bestseller Let Me Be Frank With You, Sorry for Your Trouble, Rock Springs and A Multitude of Sins, which contain many widely anthologized stories. He lives in New Orleans with his wife Kristina Ford.

“This is a brilliant and engrossing portrait of a fragile American family and the fragile consciousness of a teenage boy. It is also fascinating in the way it reveals the plot in the opening page and then winds backwards, offering a more and more intimate version of the story.” — Colm Toibin

“Robust and powerful… Ford is able to tap into something momentous and elemental about the profound moral chaos behind the actions of seemingly responsible people… Ford has dramatized the frightening discovery of the world’s anarchic heart.” — Wall Street Journal

“A triumph of voice.... The writing... is spare, but heartbreaking.” — USA Today

“Richard Ford returns with one of his most powerful novels yet…Ford has never written better…Canada is Richard Ford’s best book since Independence Day, and despite its robbery and killings it too depends on its voice, a voice oddly calm and marked by the spare grandeur of its landscape.” — Daily Beast

“Awe-inspiring… The laconic, grief-stricken voice of Dell, looking back on his past, trying to make some kind sense of what happened when his family imploded, keeps you turning pages, as do the quiet, thought-provoking revelations that Ford drops in throughout.” — O, the Oprah Magazine

“Told in Ford’s exquisitely detailed, unhurried prose…Ford is interested here in the ways snap decisions can bend life in unexpected directions... Canada’s characters grapple with this... and the answers they come up with define the rest of their lives, along with this quietly thoughtful book.” — Entertainment Weekly

“One of the most memorably heartbreaking novels of the year.” — Christian Science Monitor

“[Ford’s] newest novel Canada, shows an artist in full command of his craft—sparsely elegant and bracingly direct, with a refreshing lack of irony or tricks.” — Men’s Journal

“Marvelous…Canada is a masterpiece of a story with rich language and dialogue filled with suspense, bleakness, human frailties and flaws, and a little bit of hope seen through the eyes of an adolescent boy whose emotions seem often aligned with the desolate landscape of its setting.” — The Oregonian (Portland)

“A must-read. . . . Canada reminds us why Ford is considered one of this country’s most distinguished writers.” — St. Paul Pioneer Press

“[A] deeply felt and magnificently imagined work…With Canada, Ford has given us his deepest exploration yet of weakness and betrayal set amid a boy’s coming of age. It is a memorable novel, suffused with love, sorrow and regret.” — Austin American-Statesman

“[A] novel about big truths told by a writer with clear vision…solid, satisfying craftsmanship. This is a Richard Ford novel in the tradition of his earlier work. It also is a coming-of-age story, and a story about the discovery of identity.” — Washington Independent Review of Books