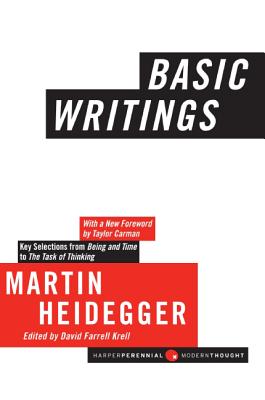 “One of the most profound thinkers of the 20th century.” — New York Times

The finest single-volume anthology of the great philosopher’s work, with a new introduction by leading Heidegger scholar Taylor Carman

Basic Writings is the finest single-volume anthology of the work of Martin Heidegger, widely considered one of the most important modern philosophers. Its selections offer a full range of the influential author's writings—including "The Origin of the Work of Art," the introduction to Being and Time, "What Is Metaphysics?," "Letter on Humanism," "The Question Concerning Technology," "The Way to Language," and "The End of Philosophy." This essential collection provides readers with a concise introduction to the groundbreaking philosophy of this brilliant and essential thinker.

Martin Heidegger (1889-1976) was born in Baden-Württemberg, Germany. He studied at the University of Freiburg and became a professor at the University of Marburg in 1932. After publishing his his magnum opus, Being and Time (1927), he returned to Freiburg to assume the chair of philosophy upon Husserl's retirement.

“One of the most profound thinkers of the 20th century.” — New York Times

“Among the most influential philosophers of modern times.” — Newsweek