I Had a Hammer: The Hank Aaron Story (Paperback) 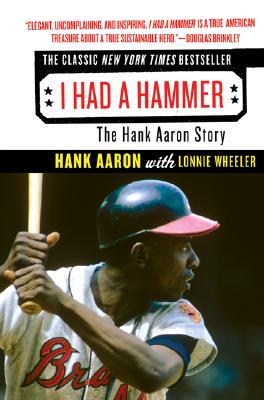 I Had a Hammer: The Hank Aaron Story (Paperback)

The man who shattered Babe Ruth's lifetime home run record, Henry "Hammering Hank" Aaron left his indelible mark on professional baseball and the world. But the world also left its mark on him.

I Had a Hammer is much more than the intimate autobiography of one of the greatest names in pro sports—it is a fascinating social history of twentieth-century America. With courage and candor, Aaron recalls his struggles and triumphs in an atmosphere of virulent racism. He relives the breathtaking moment when, in the heat of hatred and controversy, he hit his 715th home run to break Ruth's cherished record—an accomplishment for which Aaron received more than 900,000 letters, many of them vicious and racially charged. And his story continues through the remainder of his milestone-setting, barrier-smashing career as a player and, later, Atlanta Braves executive—offering an eye-opening and unforgettable portrait of an incomparable athlete, his sport, his epoch, and his world.

"Elegant, uncomplaining, and inspiring, I Had a Hammer is a true American treasure about a true sustainable hero." — Douglas Brinkley