Alek: My Life from Sudanese Refugee to International Supermodel (Paperback) 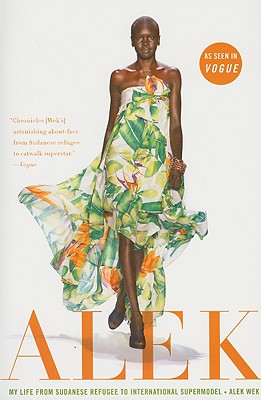 Alek: My Life from Sudanese Refugee to International Supermodel (Paperback)

Alek Wek has been the face of ad campaigns for companies ranging from Coach to Michael Kors to Nars and has worked the runways on behalf of designers such as Diane von Furstenberg and Christian Dior. Yet her defining moments extend beyond the runways of New York, Milan, Paris, and London.

Born to a middle-class family in the Sudan, Wek found her life suddenly inverted when civil war broke out among outlaw militias, the Muslim-dominated government, and southern rebels. The conflict not only killed two million people, it created an entire community of refugees, including Wek's family—many of whom fled to London. Here is Wek's incredible, daring story of rising from refugee to international supermodel.

Discovered on the streets of London, Alek Wek, a former refugee, is now an international supermodel who has graced dozens of top runways and the pages of the most glamorous fashion magazines. An entrepreneur as well as a model, she has her own handbag line, Wek 1933. She currently resides in Brooklyn, New York.

“Readers will be disarmed by the....intimate voice in which [Wek] narrates her stratospheric rise…[an] autobiography with substance.” — Kirkus Reviews