The 101 Most Influential People Who Never Lived: How Characters of Fiction, Myth, Legends, Television, and Movies Have Shaped Our Society, Changed Our Behavior, and Set the Course of History (Paperback) 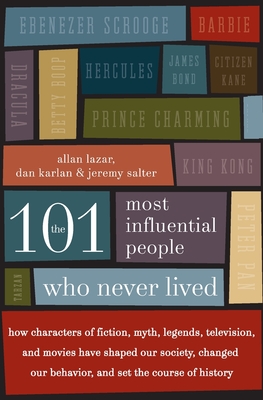 The 101 Most Influential People Who Never Lived: How Characters of Fiction, Myth, Legends, Television, and Movies Have Shaped Our Society, Changed Our Behavior, and Set the Course of History (Paperback)

From Santa Claus to Buffy the Vampire Slayer, from Uncle Sam to Uncle Tom, here is a compelling, eye-opening, and endlessly entertaining compendium of fictional trendsetters and world-shakers who have helped shape our culture and our lives. The 101 Most Influential People Who Never Lived offers fascinating histories of our most beloved, hated, feared, and revered invented icons and the indelible marks they made on civilization, including:

# 80: Icarus, the headstrong high-flyer who inspired the Wright brothers and humankind's dreams of defying gravity . . . while demonstrating the pressing need for flight insurance

# 58: Saint Valentine, the hapless, de-canonized loser who lost his heart and head at about the same time

# 43: Barbie, the bodacious plastic babe who became a role model for millions of little girls, setting an impossible standard for beauty and style

Allan Lazar is a graduate of Jefferson Medical College of Philadelphia and did post graduate work at the University of Chicago where he was also a member of the faculty. He has also served on the faculty of Columbia University College of Physicians & Surgeons as well as Fairleigh Dickinson University Dental School.

Jeremy Salter was born in New York City but grew up in Long Branch, NJ. He has a BS in chemistry from Monmouth College and worked in the drug industry as an analytical chemist. He had studied writing at the feet of Allan Lazar and his dog, Yogi.