Have A Nice Day: A Tale of Blood and Sweatsocks (Mass Market) 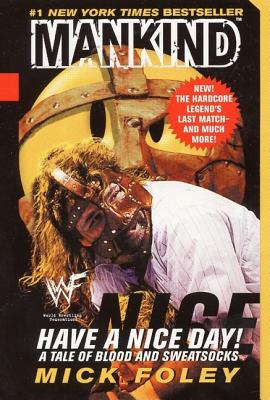 Have A Nice Day: A Tale of Blood and Sweatsocks (Mass Market)

The #1 New York Times bestselling autobiography of World Wrestling Entertainment's Hall of Famer Mick Foley, Have a Nice Day! gives an inside look into the reckless and vengeful life of one of the WWE’s most complex and feared superstars.

In the rich history of the World Wrestling Entertainment, no superstar has been more deranged or maniacal than Mankind. A skilled grappler who can beat opponents with sheer brutality, this Boiler Room Dweller is one of three personalities (along with Dude Love and Cactus Jack) of the unstable Mick Foley.

From the very beginning, Mankind loved pain. From his outcast days growing up in Bloomingdale, ID, where he was smacked in the lip while playing a game, he vowed vengeance on his enemies and became one of the hottest rising stars in the then WWF.

With his debut in the WWF as Mankind, rumbling with the likes of Undertaker and tag-teaming with Stone Cold as Dude Love, Mick Foley is a 4-time Tag-Team Championship and a WWF Hardcore Champion.

Mick Foley is the former Commissioner of the World Wrestling Federation and one of its biggest Superstars. He loves amusement parks, is an American history buff, and can withstand more pain in one hour than most of us could in a lifetime. He is the author of two New York Times bestsellers: Have a Nice Day! and Mick Foley's Christmas Chaos. He currently lives in New York State with his wife and three children.

Mankind is one of the three deranged personalities of Mick Foley, onetime World Wrestling Federation Champion. This is his first book.