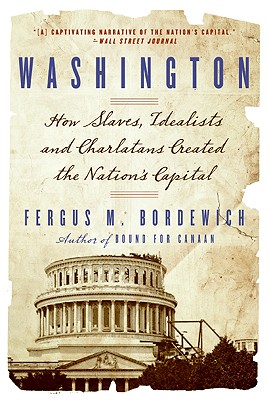 Washington, D.C., is home to the most influential power brokers in the world. But how did we come to call D.C.—a place once described as a mere swamp "producing nothing except myriads of toads and frogs (of enormous size)," and which was strategically indefensible, captive to the politics of slavery, and the target of unbridled land speculation—our nation's capital? In Washington, acclaimed, award-winning author Fergus M. Bordewich turns to the backroom deal-making and shifting alliances among our Founding Fathers to find out, and in doing so pulls back the curtain on the lives of the slaves who actually built the city. The answers revealed in this eye-opening book are not only surprising but also illuminate a story of unexpected triumph over a multitude of political and financial obstacles, including fraudulent real estate deals, overextended financiers, and management more apt for a banana republic than an emerging world power.

In a page-turning work that reveals the hidden and unsavory side to the nation's beginnings, Bordewich once again brings his novelist's eye to a little-known chapter of American history.

Fergus M. Bordewich is the author of several books, including Bound for Canaan, Killing the White Man's Indian, and My Mother's Ghost, a memoir. The son of a national civil rights leader for Native Americans, he was introduced early in life to racial politics. As a journalist, he has written widely on political and cultural subjects in Europe, the Middle East, and East Asia. His articles have appeared in the New York Times, Wall Street Journal, Smithsonian, American Heritage, Atlantic Monthly, Harper's, Reader's Digest, and many other publications. He was born in New York City, and now lives in New York's Hudson River Valley with his wife and daughter.

“[A] captivating narrative of the national’s capital.” — Wall Street Journal

A splendid and eminently readable account of both the seamy and idealistic impulses that placed our nation’s capital where it is, and an excellent reminder of the importance of land speculation in our political history from the very beginning to today. — Michael Korda, author of IKE and ULYSSES S. GRANT