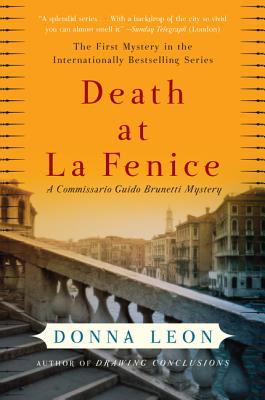 “A gripping first mystery, as beguiling and secretly sinister as Venice herself. Sparkling and irresistible.” — Rita Mae Brown

The first book in the internationally bestselling Guido Brunetti detective series in which a high society murder leads Guido to investigate the darker side of beautiful Venice.

There is little violent crime in Venice, a serenely beautiful floating city of mystery and magic, history and decay. But the evil that does occasionally rear its head is the jurisdiction of Guido Brunetti, the suave, urbane vice-commissario of police and a genius at detection. Now all of his admirable abilities must come into play in the deadly affair of Maestro Helmut Wellauer, a world-renowned conductor who died painfully from cyanide poisoning during an intermission at La Fenice.

But as the investigation unfolds, a chilling picture slowly begins to take shape—a detailed portrait of revenge painted with vivid strokes of hatred and shocking depravity. And the dilemma for Guido Brunetti will not be finding a murder suspect, but rather narrowing the choices down to one.

Donna Leon has written four previous Guido Brunetti novels, Death and Judgment, Dressed for Death, Death in a Strange Country, and Death at La Fenice, which won the Suntory Prize for the best suspense novel of 1991. She teaches English at the University of Maryland extension at a U.S. Air Force base near Venice Italy, where she has lived for over twenty years.

“Donna Leon’s Venetian mysteries never disappoint, calling up the romantic sights and sounds of La Serenissima even as they acquaint us with the practical matters that concern the city’s residents.” — Marilyn Stasio, New York Times Book Review

“Guido Brunetti can ride in my gondola anytime. What a splendid detective.” — Susan Isaacs, author of After All These Years

“Donna Leon has given fans of subtle, clever and literate mysteries something to cheer about...A wonderful read.” — Tony Hillerman

“What a gripping first mystery, as beguiling and secretly sinister as Venice herself. Sparkling and irresistible.” — Rita Mae Brown

“A challenging mystery, a sophisticated drama, and a unique glimpse of a medieval society that stilll flourishes.” — St Louis Post-Dispatch