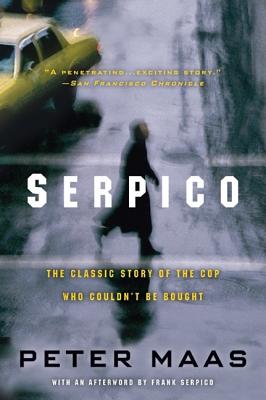 THE CLASSIC TRUE STORY OF THE COP WHO COULDN'T BE BOUGHT

"I don't think anyone can come away from Serpico without admiration for one man's lonely integrity." —New York Times

With an Afterword by Frank Serpico

The 1960s was a time of social and generational upheaval felt with particular intensity in the melting pot of New York City. A culture of corruption pervaded the New York Police Department, where payoffs, protection, and shakedowns of gambling rackets and drug dealers were common practice. The so-called blue code of silence protected the minority of crooked cops from the sanction of the majority.

Into this maelstrom came a working class, Brooklyn-born, Italian cop with long hair, a beard, and a taste for opera and ballet. Frank Serpico was a man who couldn't be silenced—or bought—and he refused to go along with the system. He had sworn an oath to uphold the law, even if the perpetrators happened to be other cops. For this unwavering commitment to justice, Serpico nearly paid with his life.

Peter Maas's is the author of the number one New York Times bestseller Underboss. His other notable bestsellers include The Valachi Papers, Serpico, Manhunt, and In a Child's Name. He lives in New York City.

"I don't think anyone can come away from Serpico without admiration for one man's lonely integrity." — New York Times

"An absorbing story of what one angry, honest man can do." — Detroit News