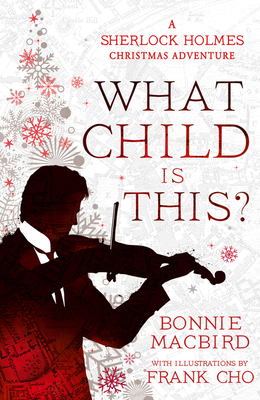 This is book number 5 in the Sherlock Holmes Adventure series.

It's the season of peace and goodwill, but a Victorian Christmas is no holiday for the world's most popular detective in this new book from Bonnie MacBird, author of the bestselling Sherlock Holmes novel Art in the Blood.

It's Christmastime in London, and Sherlock Holmes takes on two cases. The angelic three-year-old child of a wealthy couple is the target of a vicious kidnapper, and a country aristocrat worries that his handsome, favourite son has mysteriously vanished from his London pied terre. Holmes and Watson, aided by the colourful Heffie O'Malley, slip slide in the ice to ensure a merry Christmas is had by nearly everybody . . .

Bonnie MacBird is passionate about Victorian London and Sherlock Holmes. She lives in an 1890 building right off Baker Street, and fell in love with Holmes as a schoolgirl in her native California. After many years in the entertainment industry as a film executive, Emmy winning producer and screenwriter, she now writes the critically acclaimed Sherlock Holmes Adventure Series for HarperCollins, bringing the much-loved detective back, traditional style, in full-length adventures. Meticulous research, a flair for deductions and a decided sense of humour have turned these into fan favourites. ART IN THE BLOOD was translated into twenty languages and was followed by UNQUIET SPIRITS, THE DEVIL'S DUE and THE THREE LOCKS.