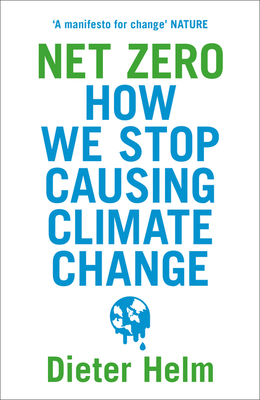 
On Our Shelves Now at:
What can we really do about the climate emergency?


The inconvenient truth is that we are causing the climate crisis with our carbon intensive lifestyles and that fixing - or even just slowing - it will affect all of us. But it can be done.

In Net Zero the economist Professor Dieter Helm addresses the action we would all need to take, whether personal, local, national or global, if we really wanted to stop causing climate change.

Net Zero is Professor Dieter Helm's measured, balanced view of how we stop causing climate change by adopting a net zero strategy of reducing carbon emissions and increasing carbon absorption. It is a rational look at why the past 30 years efforts has failed and why and how the next 30 years can succeed. It is a vital book for anyone who hears the clamour of Extinction Rebellion and other ecological activists, but wonders what they can actually do.

Professor Dieter Helm is Professor of Economic Policy at the University of Oxford and Official Fellow in Economics at New College, Oxford. He specialises in the environment, notably in climate change, biodiversity, water, energy and agriculture. Previous books have included Green and Prosperous Land: A Blueprint for Rescuing the British Countryside, Burn Out: The Endgame of Fossil Fuels, The Carbon Crunch and Natural Capital: Valuing the Planet.In December 2015, Dieter was reappointed as Independent Chair of the Natural Capital Committee. He is also an Honorary Vice President of the Berkshire, Buckinghamshire and Oxfordshire Wildlife Trust.